Robot Lucy at your service 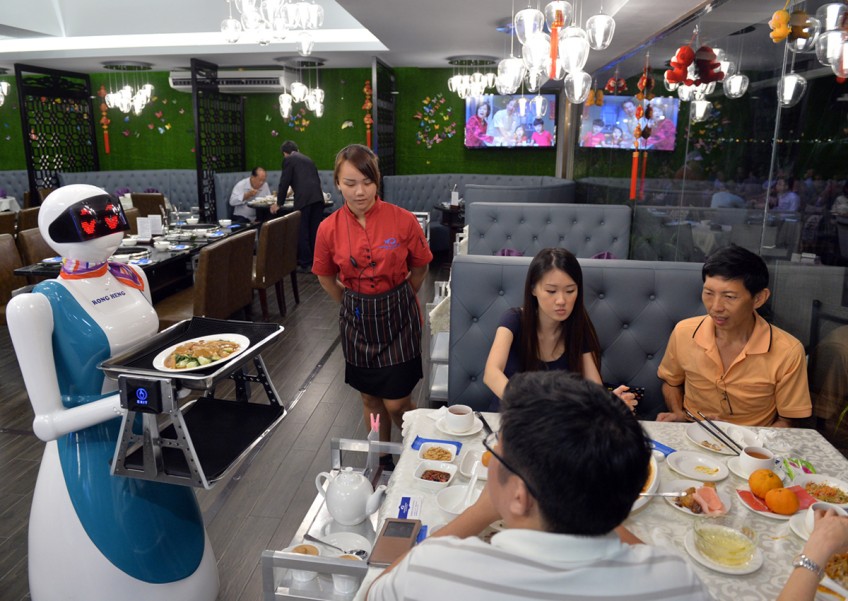 When diners visit the newly opened Rong Heng Seafood restaurant at East Coast Seafood Centre, they are greeted at the entrance by a robot clad in a red apron and holding a tray.

At the table, food is delivered by two other robots - Lucy and Mary - who have pretty scarves tied around their necks.

If it is your birthday, they will also do a little jig for you.

The restaurant owners are using robots to deal with the manpower shortage, a common woe faced by the food and beverage industry here.

Designed in Japan and made in China, Lucy and Mary weigh 70kg each and can carry up to 15kg. They take food to diners and return dirty plates to the kitchen.

When the food is ready, a human staff member inputs the table number it is meant for on a screen in the kitchen and the robot takes off with the dish, which is placed on a special tray designed for it.

Moving at an average person's walking pace, the robot can get to any of the 29 tables on the ground floor of the restaurant in two minutes.

When it arrives at the table, a human staff member transfers the dish to the table. Diners can also do this themselves if they wish. When the robot waiter gets to the table, it announces in Mandarin: "Hi there. Your food is here. Please enjoy."

This is not the only thing it can say. If there are obstacles in its way, it will say politely in Mandarin: "Hi there, beautiful, please give way. I have food to deliver."

The restaurant's executive director, Mr Frank Liu, 55, who is one of its owners, says: "Hiring staff can be a challenge, so the robots are here to help relieve this problem."

The restaurant, which opened just over two weeks ago, employs eight wait staff. Without the robots, it would need 15, he says.

One of the waitresses, Ms Yeoh Shoke Leng, 23, says: "With the robots around, I don't have to walk to and from the kitchen as often. I can look after six tables instead of three."

Mr Liu says the robot waiters are also cost-effective. One costs about $17,000, but a human waiter's annual salary can be twice this amount, he says. "Robots also don't take breaks or medical leave. They don't need to eat or go on leave."

All they need is four hours to charge their batteries, which can last six to eight hours.

The restaurant owners decided to use robots after seeing them in action in restaurants in China and Japan. Rong Heng Seafood will be buying one or two more robot waiters if response to them is good.

The robots also attract diners who come for the novelty factor.

Retiree Dora Tan, 62, decided to eat there after walking by and seeing the robots inside. She says: "I've never seen anything like this in Singapore. It's interesting, but it also feels a little spooky having a robot walk past you from behind.

"I don't see how they will significantly help with the restaurant's productivity, but they are definitely cute."

This article was first published on February 7, 2016.
Get a copy of The Straits Times or go to straitstimes.com for more stories.