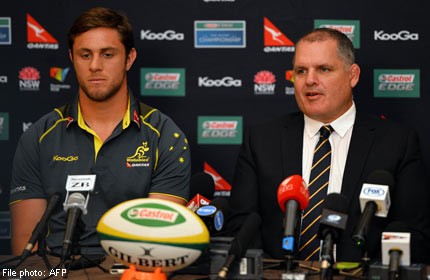 SYDNEY, New South Wales, Aug 20, 2013 (AFP) - Injury-plagued Australian backrower Hugh McMeniman was dealt another blow Tuesday with officials announcing he will miss the rest of the Rugby Championship and spring tour to Europe due to shoulder surgery.

McMeniman ran on for the Wallabies for the first time since 2008 in Saturday's 47-29 rout by New Zealand in Sydney, capping a remarkable comeback from years of injury.

But it was a short-lived reprieve, with the Australian Rugby Union saying he had been dropped from the squad after aggravating an existing shoulder complaint picked up during the Super Rugby season.

Medical staff had examined the left shoulder, fractured earlier this year, and determined that "the best course of action would be a complete reconstruction," the ARU said.

"McMeniman will undergo surgery next week in Brisbane and will be sidelined for six months," it said, describing it as a "disappointing blow" for the talented lock.

Despite debuting in 2005 McMeniman - known as "Madness" due to his fearless physicality - has played just 22 Tests in a career punctuated with injuries to his shoulder, neck and ankle.

Australia play New Zealand this Saturday in Wellington. No replacement has been announced for McMeniman.