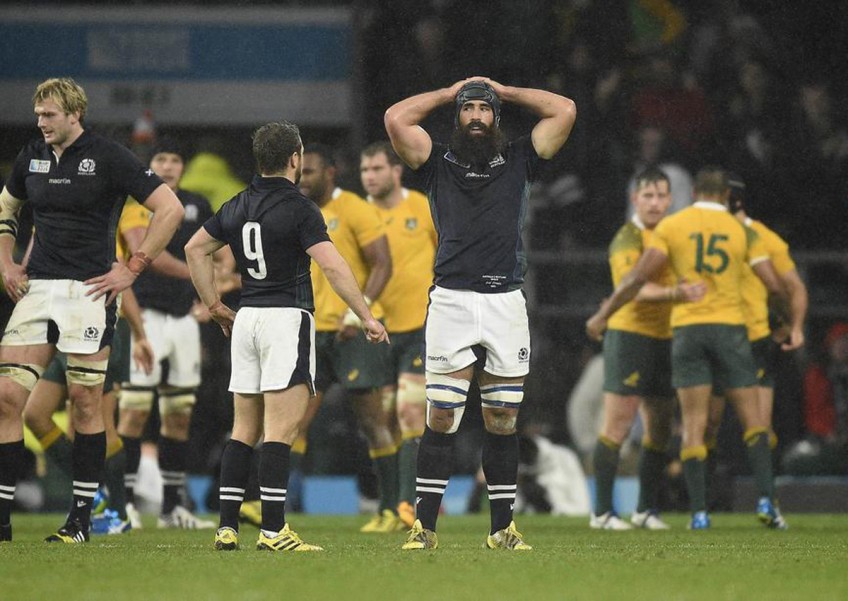 Against virtually all predictions, the Scots were leading 34-32 as a dramatic quarter-final entered the final minute.

It was then that the experienced Joubert, in charge of the 2011 World Cup final, awarded Australia a penalty after ruling Scotland replacement prop Jon Welsh had strayed offside.

After blowing the whistle at full-time, South African official Joubert - unusually for a rugby referee - sprinted off the field as a chorus of boos from irate Scotland fans rang round the ground.

Australia scrum-half Nick Phipps appeared to touch the ball before Welsh was left in an offside position.

Phipps later said he had deliberately attempted to win the loose ball which, in that case, ought to have stopped a penalty from being awarded.

"I think everyone was trying to win the ball. We were all going for it," Phipps said.

"If I see referee Craig Joubert again, I am going to tell him how disgusted I am. It was disgraceful that he ran straight off the pitch at the end like that," Hastings said.

Hastings was not alone, with former England scrum-half Matt Dawson, a World Cup-winner in 2003, saying on Twitter: "Craig Joubert you are a disgrace and should never referee again!! How dare you sprint off the pitch after that decision!!!" Scotland captain Greig Laidlaw questioned afterwards why Joubert had not called for replay assistance.

But World Rugby, the sport's governing body, said the television match official could only be called upon to rule on the build-up to scoring a try or an act of foul play.

"I asked Joubert (about the penalty) on several occasions. I'm not sure what the protocols are," Laidlaw said.

"I think you can see from the way he was taking his time....he was certainly having a look at the big screen and wasn't sure himself," added the scrum-half, who kicked 19 points.

"And then he made a sharp exit at the end of the game, that's for sure. I never got a chance to speak to him after the game, he was off that quick.

"It looked like to me that it hit Nick Phipps and it went back and then another player caught it.

"I've not had a chance to look at it on the TV, but at the time I thought there was an Aussie arm.

"But we're not the type of people to blame the little things." Scotland also had reason to feel aggrieved when Sean Maitland was sent to the sin-bin early in the second half, with Australia scoring 10 points in the wing's absence.

However, Australia coach Michael Cheika said refereeing decisions had always been part of the game while pointing out that the Wallabies had scored five tries to Scotland's three.

"You have to live with the ones you get and the ones you don't," Cheika said. "It is what it is and you just deal with it.

"When you score five tries in a World Cup quarter-final, you expect to be somewhere near the winning end of the game."