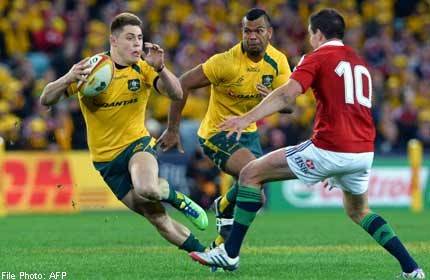 SYDNEY - Two people were killed and several injured in chaotic scenes at a rugby league match in Papua New Guinea sparked by a drunken supporter attacking a security guard with a machete, reports said Wednesday.

The match in the Pacific nation's central town of Wabag between Enga Mioks and Lae Snax Tigers was underway on Sunday when a fan was stopped by security officials on his way into the ground.

The National newspaper said he pulled out a machete, or bush knife, and killed a guard.

The attack sparked a riot among spectators with another fan killed and several others stabbed, while the Tigers team bus was torched, along with two other vehicles.

Some rugby league officials had to be flown out by helicopter after the main highway was blocked by angry Tigers supporters, the report said.

Police arrested a man in connection with the initial killing while the PNG Rugby League cancelled all Enga home games until an investigation was completed.

Rugby league is the most popular team sport in poverty-stricken Papua New Guinea and is played throughout the country, although its development has been hampered by poor infrastructure.