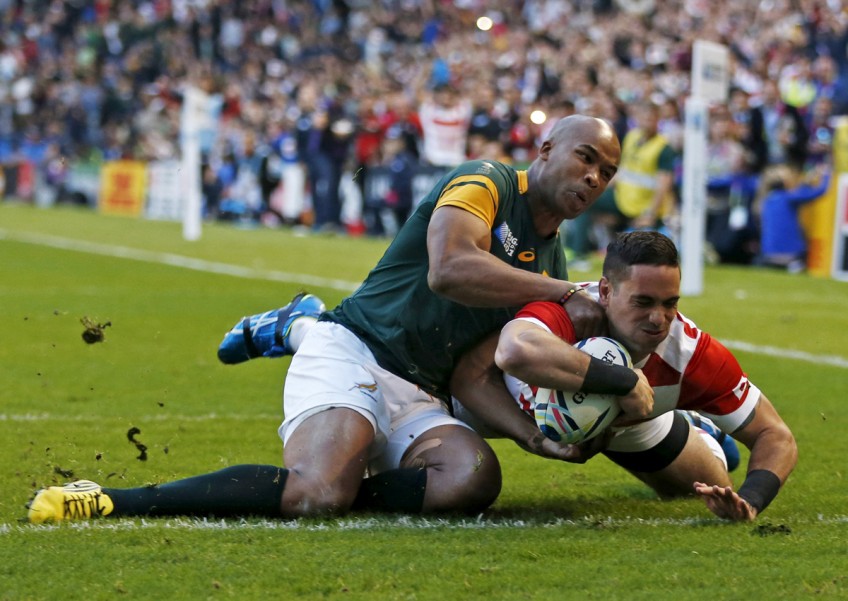 Japan's Karne Hesketh produced a killer try in the dying seconds that inflicted the biggest World Cup upset ever on South Africa and set off alarm bells in the stunned rugby power.

Japan's coach Eddie Jones did not believe the 34-32 result in Brighton. He had to look twice at the scoreboard while his players launched into wild celebrations. There was no doubting the praise showered on them.

Springbok counterpart Heyneke Meyer could not comprehend events either. "We let down our country," he said. "We represent a proud nation and I apologise to the nation." The feat overshadowed a huge 50-7 victory for Ireland over Canada and France's 32-10 win over Italy in Pool B and Georgia's achievememt in beating Tonga 17-10 in Pool C.

Japan's "Brave Blossoms", who had only won one previous game at the World Cup and are nervously preparing to host the 2019 tournament, tackled like tigers and just never gave up against the two-time champions.

South Africa may have been bigger, but they made mistakes and despite their four tries never looked like the world's third ranked team.

Three points behind in the dying minutes, Japan won a penalty and captain Michael Leitch went for a try instead of the kick that could have secured a draw.

The Springbok defence kept out an onslaught but Hesketh finally got a touchdown in the right corner.

The desperate final attack came after full back Ayumu Goromaru brilliantly kept Japan in the opening Pool D game with a try and 19 points from the boot.

Japan's players took a national flag on a lap of honour to roars of approval from the 29,000 crowd. South African captain Jean de Villiers and his teammates sank to the ground in disbelief.

"It was a pretty humbling experience today," said Jones, who is due to leave his post as coach after the World Cup.

"Japan beating South Africa ... I had to look at the scoreboard to see if I was reading it right.

"We were more than brave today, we kept sticking in there and not letting go," said Jones who also praised the courage of skippeer Leitch in going for the decisive try.

Jones said the victory was "right up there" with his achievements as coach to the Australian side that reached the 2003 World Cup final and an advisor to the South African team that won in 2007.

South Africa were rattled when Goromaru scored his first penalty in the eighth minute.

But they got the first try through Francois Louw. The powerful Bismarck du Plessis scored the Springboks second to give them a 12-10 half time lead. Lock Loudewyjk de Jager got the third at the end of an unstoppable 25 metre run.

Leitch scored Japan's first try and Goromaru kept getting penalties to keep Japan in the game.

The match swung back again to the Springboks when replacement hooker Adriaan Strauss broke through the Japanese centre to score their bonus point fourth try.

But still Japan did not give up. A scintillating back move saw Goromaru go in for a try and then convert to level again at 29-29.

A Handre Pollard penalty gave the 'Boks a three point lead with seven minutes remaining. The rest is history and the subject of soul searching in South Africa.

"This is a very big wake up call," said Meyer.

"Samoa, Scotland and US are not easy teams. Its going to be tough," the coach admitted. South Africa need to top their pool to get an easier path through the quarter finals away from one of the favourites.

Skipper de Villiers insisted the whole team had to take must shoulder the blame.

"We were beaten by the better team on the day and we need to takes responsibility for this performance. It is way below the standards we set," he said.

Japan earned tributes from around the world. "A brilliant performance by Japan, simple as that," said England's World Cup winner Jonny Wilkinson.