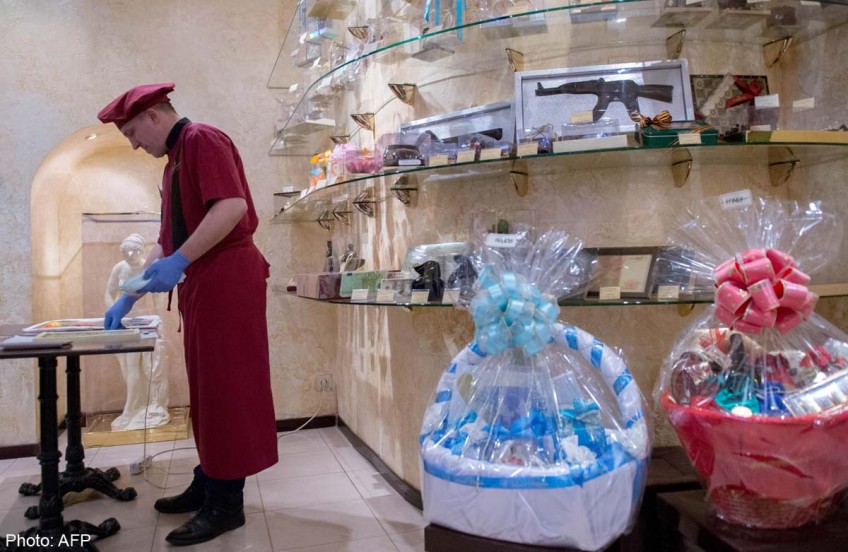 MOSCOW - Portraits of Audrey Hepburn and Charlie Chaplin, views of Venetian canals or a growling lion, these artworks all have something in common outside hefty pricetags -- they're edible.

Long known in the West, "chocolate painting" was introduced in Russia about a decade ago but until lately, remained the preserve of the elite, with pieces costing up to USD$1,000 (S$1,300).

Irina Eldarkhanova, whose family-run firm holds the country's sole patent for chocolate painting, said one guest to the 2011 wedding of Britain's Prince William and Kate Middleton commissioned the couple's chocolate portrait as a gift.

Yet more and more "ordinary" shoppers are seduced by this luxury, like Tatiana, a sales manager at a Moscow clothing shop,

"That can't be true!" cried her eight-year-old nephew Sergey when she offered him a small picture of a sailboat rocking on the waves. "It's really chocolate!"

Tatiana, who did not give her last name, said her nephew has "checked" his gift with a lick at least 20 times but not yet dared take a bite.

"My colleagues gave me something similar, a picture of a vase filled with roses, on March 8, International Women's Day," the 35-year-old said. "I knew immediately what I wanted to give Sergey for his birthday."

And while such painting in the West can range from kitsch art to a clever gift or a craft for children, Eldarkhanova sees things differently.

"Chocolate painting is, to us, a work of art created using a special material," the businesswoman, whose firm started in 2001, told AFP.

"It allows us to perfectly express emotions," said an equally passionate artist for the firm, Vitali Ponomarev. "It's about anticipation, of a party, of love, of joy."

Ponomarev paints with softened white chocolate mixed with apple, orange or cherry alcohol, adding food dyes to vary or intensify his colours. The "paint" sets almost immediately so he works swiftly on a base of white chocolate, using his fingers or tiny palette knife.

It can take up to three days to finish a work, which weighs an average 1.5 lilogrammes (3.3 pounds) and measures at most 75 centimetres (29 inches, he said.

A painting can be eaten up to one year after production, said Eldarkhanova, or admired for about 10 years provided an appropriate temperature is maintained.

The last pope, Benedict XVI, a Saudi sheikh and former Ukrainian president Leonid Kuchma were all offered their edible likenesses.

"Men love to order their portraits while companies ask us to draw their office buildings," said Eldarkhanova.

And the collapse of the ruble -- after Western sanctions for Russia's role in backing separatist rebels in eastern Ukraine combined with falling prices of oil, a pillar of Russia's economy -- has not affected business.

Chocolate is widely held as a morale booster, but those in the trade also point to what they call Russians' "superstitious" side -- ordering one's portrait in chocolate is seen as a way of ensuring life will be as sweet as candy.

Sales "have not dropped, but even picked up a bit," said Eldarkhanova, who is studying the possibility of opening up stores in China and the United Arab Emirates.

Confael would not disclose its sales figures but said it turns out 10 to 30 chocolate paintings a month, all made to order at a client's request in one of the stores or via Internet.

The owner, however, concedes a downside to the art -- the final result can be fleeting.

"Many people don't believe it's real chocolate," she said so immediately "break off little bits to taste it."