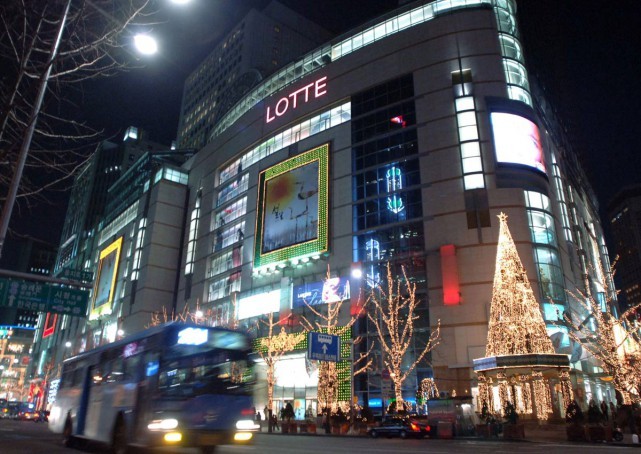 South Korean retail giant Lotte Group is facing its worst management crisis to date as the prosecution expands its probe on the group and its seven affiliates over allegations of embezzlement and the creation of a multibillion won slush fund.

More than 200 investigators from the Seoul Central Prosecutor's office raided 17 Lotte offices Friday morning, including the group headquarters in central Seoul and the residence of Lotte Group chairman Shin Dong-bin and key executives.

The record-scale raids, initially sparked by a bribery investigation into the group's duty-free business, are jeopardizing Lotte's core business projects for the year -- most notably its plans to list its hotel unit and to win back a crucial business license to continue operating its second-largest duty-free store in Seoul.

The widening probe into Lotte Group has already pushed its petrochemicals unit Lotte Chemical to abruptly withdraw its bid to acquire US chemicals producer Axiall Corp., just days after announcing its proposal for the buyout.

"We decided to withdraw from the bid given the current difficulties faced by Lotte Group and the highly competitive nature of the bid," Lotte Chemical said in a statement released Friday.

The planned initial public offering of Hotel Lotte, the de facto holding company of the group's operations in Korea, is expected to face new delays and even possible cancellation given the group's current circumstances, industry watchers said.

By offering 47.85 million shares, Hotel Lotte was expected to secure up to 5.2 trillion won ($4.5 billion) in new funds through the IPO, considered the world's biggest this year.

Last week, Hotel Lotte, which operates Lotte's duty-free business, delayed its scheduled IPO to July and scaled back its proposed price range after its key executives came under investigation on suspicions of receiving kickbacks from local budget cosmetics brand Nature Republic in exchange for store space.

The new raids that began Friday and the expected legal procedures to follow are now fostering fresh uncertainty for Hotel Lotte's IPO timetable.

According to KRX regulations, the deadline for Hotel Lotte to complete its IPO is July 27, six months from the preliminary approval date.

In the case that prosecutors discover any form of accounting fraud or issues with Hotel Lotte's finance, the company would be unable to complete its public offering procedures in time.

"(Given the current situation,) we cannot rule out the possibility that Hotel Lotte could cancel its IPO," a Korea Exchange official was quoted as telling the local media.

Hotel Lotte said it is scheduled to hold an emergency meeting with the KRX early this week to discuss the new developments.

"As the investigation began just days ago, we cannot confirm any new developments as of now," Hotel Lotte spokesperson Cho Baek-rae told The Korea Herald.

After ousting his elder brother in a bitter fraternal feud over control of Lotte, the chairman had vowed to win back public trust by making its main hotel unit public and improving corporate transparency.

The widened probe is further expected to hurt Lotte's chances in winning a coveted government license to operate a duty-free store in downtown Seoul due to be issued through a bidding process later this year.

Hotel Lotte has been pinning high hopes on winning a new license during the upcoming offer as it failed to reclaim its operational rights to its duty-free store in Jamsil in November last year.

The Jamsil store, which generated roughly 600 billion won in annual sales in 2015 as Lotte's second-largest duty-free shop in Seoul, is set to close later this month.

Resuming the store's operation is crucial to Hotel Lotte's valuation, as some 85 per cent of its sales are generated via its duty-free business.

Duty-free stores are a rare bright spot in Korea's lackluster retail sector, growing by an average 20 per cent over the past five years. Last year, they posted a combined 9.2 trillion won ($8 billion) in sales.

By going public, Hotel Lotte had also sought to raise funds for the aggressive expansion of its duty-free business overseas through strategic investment and M&As, with aims to step up as the world's No. 1 duty-free operator in the next few years.

However, the company is likely to refrain from making big investments in the near future given the IPO is set for an indefinite delay, among other apparent hurdles.

Even as Lotte's group-wide crisis deepens, the fraternal feud between incumbent chairman Shin Dong-bin and his displaced elder brother Shin Dong-joo is expected to intensify once again in the weeks ahead.

Lotte Holdings is scheduled to hold its regular shareholder's meeting in Tokyo later this month, according to Lotte Group. Upon Shin Dong-joo's request, the upcoming meeting is set to include a vote on removing chairman Shin Dong-bin and Lotte Holdings CEO Takayuki Tsukuda from the company's board.