S-League: Valle happy with a draw 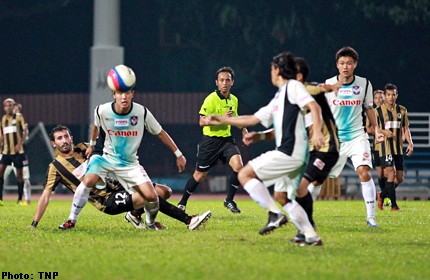 Scrappy affair: Both Tanjong Pagar (in stripes) and Albirex Niigata (in white) players cancelling each other out in a tightly-contested encounter.

SINGAPORE - All season long, Tanjong Pagar coach Patrick Vallee has stuck to the club's pre-season objective of a mid-table finish.

This, even in the face of some sterling results, which propelled them into their current third place in the league.

Perhaps that's why the Frenchman looked satisfied after their 0-0 draw with Albirex Niigata at the Queenstown Stadium on Tuesday night.

The result meant that the hosts are now seven points adrift of league leaders and defending champions Tampines Rovers, who have two games in hand.

The Japanese team and the Jaguars, second and third in the league table respectively, were both solid defensively, but goal-scoring chances were few and far between.

Vallee showed glimpses of his fiery self when he debated with one of the assistant referees and the fourth official midway through the second half, but he was a picture of calm in the post-match media conference.

He said: "We had a very good game, defensively speaking, tonight.

"We were cautious in the first half with not a lot of chances... it was a tough match between two of the top teams and we were careful not to concede a goal.

"But we created more in the second half and were unlucky to have not scored."

After an insipid first half, marked by robust challenges by the likes of centre back Ahmad Latiff and fullback Zahid Ahmad, the home side looked sharper at the start of the second half, with Monsef Zerka foiled at point-blank range by Kento Fukuda's last-ditch tackle.

Hafiz Nor's introduction in the 75th minute injected some spark into the Jaguars' attack, but they could not find a way through the White Swans' defence.

With the result, Albirex have now gone three consecutive matches without a win, equalling their winless sequence in March and April this year.

Albirex coach Koichi Sugiyama said: "I am not satisfied with the result, although my players tried to get a goal for 90 minutes and played our brand of football.

"(Captain) Shuhei Hotta came on as a substitute today, which is good news, but I have to see whether he can last an entire match in the next game.

"He is an important player to us and we need him in every game."

The league positions of both teams remained unchanged, but Woodlands Wellington are now fourth and a point adrift of Tanjong Pagar after their 5-2 thrashing of the Courts Young Lions at the Woodlands Stadium last night.

Home United will also leapfrog Tanjong Pagar to third place, if they beat Balestier Khalsa at the Bishan Stadium on Wednesday (July 17).

Lee Lim Saeng's men beat the Tigers 4-0 at the Toa Payoh Stadium earlier this season, but Darren Stewart's charges have been unbeaten in their last 10 matches in all competitions.

Meanwhile, Warriors FC will host Malaysian side Harimau Muda B at the Choa Chu Kang Stadium.