Salute to titan who turned island into First World nation 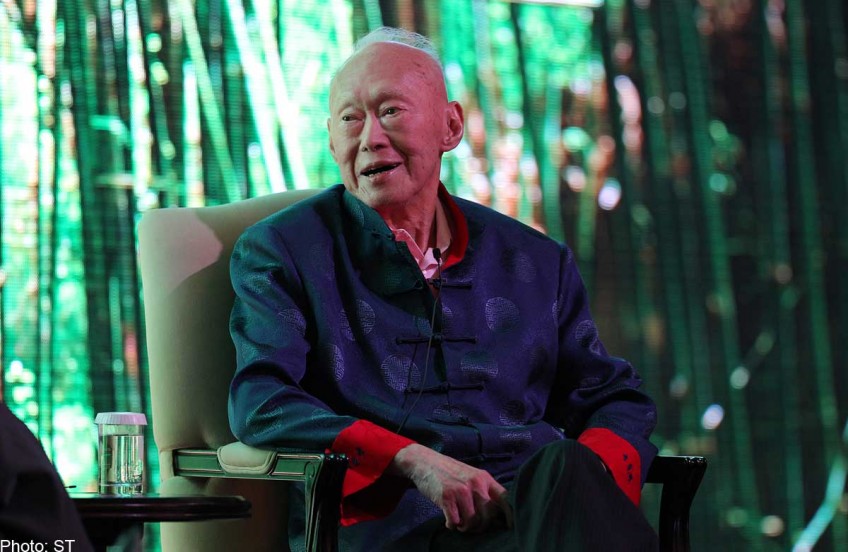 Mr Lee Kuan Yew is a colossus in the stupendous transformation of a backwater Third World island into a First World nation.

I believe he would want Singaporeans to focus firmly on securing the future of Singapore in the next 50 years, even as they pray and hope he will recover to celebrate the 50th anniversary of Singapore's independence on Aug 9 ("Outpouring of good wishes for Mr Lee on social media"; last Saturday).

He was the stalwart leading the charge to make a definitive difference to the lives and future well-being of Singaporeans.

He and his team of Cabinet colleagues met all the monumental challenges confronting the fledgling independent island head on.

Failure stared them in the face often but, led by Mr Lee - an indomitable titan fired in the fiercest furnace, they forged the way through with well thought-out and brilliantly executed strategies and programmes.

To flinch, prevaricate or even turn tail was never their option.

I salute Mr Lee's tenacity, perseverance, dedication and lifelong commitment in serving the nation and its people.

His oratorical prowess, statesmanship and an astute ability to understand the interplay of political, military and financial forces among nations made him a much sought-after speaker at international conferences.

He set the direction, pace and substance in transforming a tiny island, barren of natural resources and without a hinterland, to become a bustling metropolis pulsating with the hallmarks of world-class education, healthcare, transport, housing and social amenities.

He forged a nation out of disparate communities, undeterred by serious setbacks and challenges, and oversaw the building of the infrastructural ballast and determinants that set Singapore on the world map, and enabled it to consistently top the international ranking list in many sectors of public administration and governance.

His detractors might want to light the candle, rather than curse the darkness, in acknowledgement of his unwavering lifelong mission to improve the lot of all Singaporeans, regardless of race, language or religion.

It would be an impregnable foundation in nation-building when all Singaporeans come together to become "One People, One Nation, One Singapore".

I join all Singaporeans to celebrate Mr Lee's stellar contributions to the building of our beloved First World Singapore.