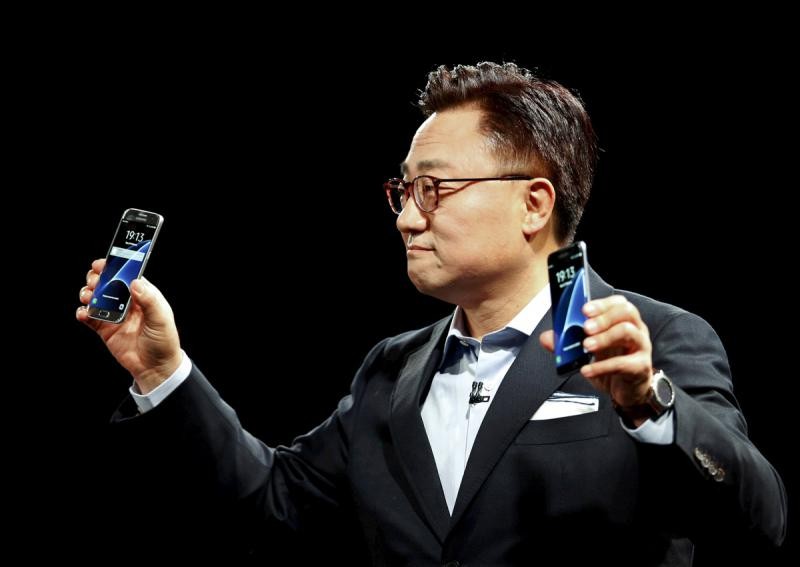 Mr Dongjin Koh has come a long way since his humble beginnings.

From worrying about going hungry while growing up in post-war Korea in the 1960s, he now charts the course of one of the world's most important technology brands.

Since taking on the role last December, he has also launched the Galaxy S7 and S7 edge smartphone, to critical acclaim.

Yet, despite his status, he is well-liked by employees for being humble, realistic and reasonable. It is an impression that this reporter got at the start of this exclusive interview, when he insisted affably that "you can just call me DJ".

Born in 1963, 10 years after the Korean war ended, the Seoul native grew up - the youngest in his family - with three brothers and two sisters.

His family was not rich and times were hard.

"It became a competition and the youngest will be left with no food to eat (at times). So I learnt how to behave properly," he said.

At 11, his mother got him to learn the Thousand Character Classic Chinese poem. "She felt that it would help me in life," he said.

He recited a line from the poem: "'If you are boastful, people will be suspicious of you. But if you are humble, people will follow you.'

"This phrase has become the motto of my life - to be humble to everybody."

Mr Koh joined Samsung in 1984 after graduating from Sungkyunkwan University with an industrial engineering degree.

He started in human resources, before becoming head of the Samsung Electronics Research Institute in Britain from 2002 to 2006. That was followed by a stint in product strategy in mobile business. He then joined the mobile research and development team, which he would later helm.

That was before his current role as Samsung's mobile president.

"This is a saying that I believe strongly in and that truly reflects my management style," he said.

He observed that there are a lot of good junior engineers in Samsung who might not speak up, even if their seniors said something wrong.

"This isn't applicable just in Asia, but also in the States. Many conservative firms are like that. I want to change the culture of my division."

He cited another line from the poem: "Listen to your juniors, think carefully, be open to them and by listening you can get their heart."

He sends this to his senior executives to remind them to listen.

In fact, he loves talking - and listening - to his junior staff so much that he allocates 20 minutes of open discussion time with them every Friday. "Whenever I talk to them, I get energy," he said.

Mr Koh said his management philosophy has to do with his tough childhood.

"Without strong partnership with my oldest brother, I could not survive in that tough environment. But I also had to maintain good relationships with my other brothers and sisters," he said.

He learnt from his mother about the importance of building partnerships. His mother, who started working for Samsung Life Insurance in her 50s, always made it a point to pass some of her earnings to her agents.

"I could not understand it because my mum was working so hard so she should take the money. But she told me, 'I must give back to those who have supported me.'"

He revealed that this was why he never set certain targets for his sales team but supports them and accepts the results they achieve.

"I believe we must do our best, our utmost effort. The results that follow, we must accept them, as long as we have done our best."

FROM TOP-DOWN TO CONSULTATIVE

His efforts in changing Samsung's top-down culture into a more consultative one involve inculcating innovation.

He wants his team to adapt to the ever-changing environment and technology landscape, and not to be afraid of change.

"I also remind them of the importance of challenging, collaborating, innovating and improving."

He set himself three targets when he became Samsung's mobile chief.

The first is to make Samsung Mobile a beloved product and brand.

He gave the example of the Samsung Pay mobile payment service. "Because the intelligent system we want to deliver is inside the phone, and these (services) can make our customers happy - this is my dream."

The second goal is to build mutual respect among Samsung's partners.

"Lastly, but most importantly, I want to build trust among my employees."

This article was first published on April 20, 2016.
Get a copy of The Straits Times or go to straitstimes.com for more stories.