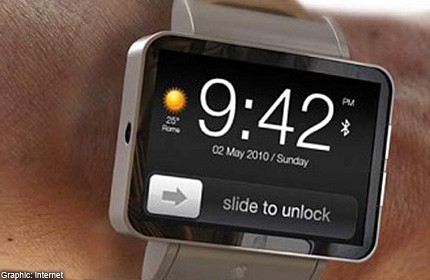 Samsung Electronics, Apple Inc. and LG Electronics, the world's top three electronics firms, are rumoured to be taking their competition to the next level this fall in the emerging smartwatch market.

Each company is ready to release a smartwatch - Samsung with Galaxy Gear, Apple with iWatch and LG with GWatch - most likely by the end of this year.

Samsung is to release Galaxy Gear at the upcoming IFA trade show during its "Unpacked Episode 2" event, along with LG, which is packing more ammunition on top of its well-received G2 and the G Pad, the new tablet it will unveil at the show.

But industry experts believe the watches themselves are unlikely to tout any unique functions, at most offering a Bluetooth connection to the user's main device.

For this purpose, Samsung will unveil Galaxy Gear as a bundle with its phablet Note 3, according to industry watchers. Previously, LG Electronics had sold the Prada phone in a bundle with a watch.

However, rumours have floated that the watch may leave out some important features such as phone and flexible display. US technology media outlet The Verge reported Tuesday that the watch would not work as a phone.

Many industry observers also do not believe the phone will be flexible, mostly because other key components - including the display, battery and memory chip - are not advanced enough to support such a device.

"It may take some time for the smartwatch to become advanced. Still, Samsung is seeking to occupy the market as the company has always been a follower of Apple in mobile technologies. Samsung wants to be ahead of the rival in wearable and TV products," said Kim Hyun-yong, a researcher at E-Trade Korea, a Seoul-based securities firm.

"It will also take some time for Apple's iWatch to come out. It won't be (released) this year," Kim added.

Apple has long been rumored to be working on introducing an "iWatch." It is said that the company had a team of 100 people working on a watch-like device, and has applied for the iWatch trademark in the United States.

According to the rumours, the iWatch is likely to adopt a flexible display and work as an extended peripheral of iOS devices. For instance, it will reportedly be able to check messages and emails, and load fitness monitoring technologies.

LG Electronics, meanwhile, initiated the development early this year, undergoing tests with other arms of the group such as LG Display and LG Chem. Last month, LG sought eight trademarks, for the "G Watch," "G Glass" and "Watch G," among other names including the G Pad.

Some sources said although it is gearing up for the launch of the smartwatch, LG is unlikely to unveil it this year.

LG already has some expertise in the likes of smartwatches. In 2008, the company unveiled the LG Prada Link, a Bluetooth-enabled digital watch that can monitor its Prada phone calls as well as read SMS text messages. The following year, the company showed off its 3G watch phone LG-GD910 in Europe, enabled with a touch screen and video-calling capability.