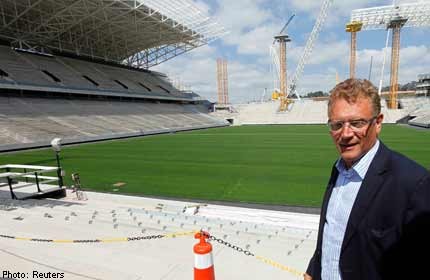 SAO PAULO - FIFA Secretary General Jerome Valcke said Monday he had no doubt that Sao Paulo's Itaquera stadium would be ready in time to host the opener of the 2014 World Cup.

The arena is 86 per cent complete ahead of next June's kick-off for Brazil 2014.

"If FIFA doubted that the opening would be in Itaquera, that doubt was resolved today," Valcke told a news conference.

"Within 10 months we will have the opening here of the World Cup," he said. "The stadium will be delivered in time for the opening."

Valcke visited the stadium as part of a tour of host cities amid concerns about delays.

He was joined by Sports Minister Aldo Rebelo, who acknowledged that there had been concern about progress at Itaquera.

"But now I am sure it will be delivered on time," Rebelo said.

The World Cup will be played in 12 host arenas, six of which were delivered for the Confederations Cup in June.

The other six are to be completed by late December under a firm deadline set by FIFA, football's world governing body.