Scaling the roof of Africa 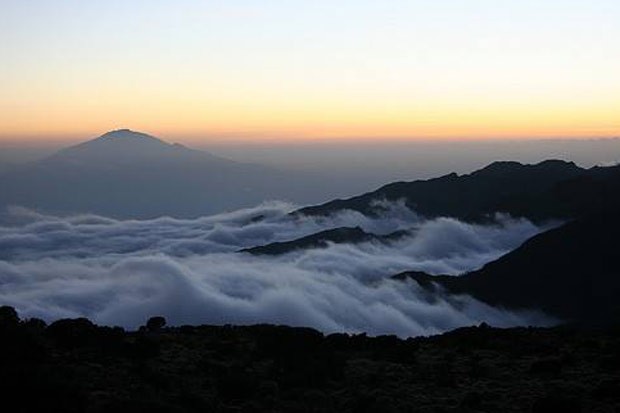 MOUNTAINS have always fascinated me. Perhaps it is their height or the sense of achievement you get in making it all the way to the top or the meticulous planning behind every trip.

My first experience of mountain climbing and hiking was when I was 14 years old. I had to climb Mount Ophir in Johor in neighbouring Malaysia as part of a school expedition.

It was only 1,276m high, but I still remember, after all these years, the euphoria I felt on reaching the summit. It was at sunrise and it was breathtaking.

Fast forward 19 years to 2014, when I made the decision to climb Mount Kilimanjaro - Africa's highest mountain - standing at over 5,800m above sea level.

An important factor in that decision was the fact that although it is a high mountain, the climb, while extremely challenging, would not be a technical one.

I am no athlete - just a regular office Joe who wanted to see if I could do something extraordinary. My target was to achieve my goal by August the following year, to celebrate Singapore's 50th birthday.

It is often said that planning for a trip is half the fun - from the moment you decide to go, to the endless research you will be doing, to organising all the elements so that you meet as few hiccups along the way. I certainly felt that way.

But climbing a mountain has its unique preparations. Apart from the planning phase, you have to prepare your body for the arduous climb.

I began training 10 months before the actual trip and supplemented that with a climb up Mount Kinabalu in Sabah to assess my readiness for Kilimanjaro.

It is very important for "sea-level dwellers" to prepare themselves gradually for high altitudes. The success rate of summiting a high mountain is almost 50 to 60 per cent on all routes and even someone as fit as a marathon runner can succumb to high altitude sickness. So, underestimate a mountain at your peril.

My training regime included climbing 200 floors twice a day and a long hike of 20 to 30km a week around Singapore. I also had a regular schedule of running and working out with weights.

There are six social routes to the top: the Northen Circuit, Lemosho, Machame, Marangu, Rongai and Umbwe. Each route has its unique itinerary and scenery.

After a few months of deliberating, I chose the Machame route (also known as the "Whiskey" route) because it is considered one of the more challenging among the six routes and it offers a variety of beautiful scenery too.

My next tough decision was to select an operator. There are almost 300 registered operators for Kilimanjaro, whose services range from budget to outright luxury.

Some of these operators are foreign companies that will sell tours at a higher rate and then subcontract to a local tour operator in Kilimanjaro. So by booking locally, you can save a few hundred dollars, which can be better spent on other things or for tipping the hardworking guides and crew.

If you are thinking of embarking on something similar, be clear on what your package includes, and how many crew are included, so that you will not get a rude shock when you arrive in Tanzania.

My tip? Make sure a private toilet is part of the package. (You can thank me later!)

The climb up to the summit, Uhuru Peak, ranges from five to nine days depending on your package or route. The more days you spend on the mountain, the easier it is for your body to acclimatise to the altitude.

My crew of six included a guide, a cook and four tent crewmen. My guide, Dennis, had started out as a porter in 2008 and moved on to his current role in 2011.

He had summited more than 200 times, enough for me to feel confident about my own journey.

Our days settled into a pattern: Dennis would walk and climb beside me while his crew would race ahead of us to set up camp, each carrying over 20kg loads.

And when we arrived at the designated campsite, our tents would be ready, popcorn and hot tea prepared and, of course, hot water for us to wash up.

On our treks, Dennis would constantly repeat to me his mantra, "Pole, pole" (pronounced as "po-ley, po-ley"), which means, "Slow…slow.

He explained that to ascend up the mountain slowly was the trick to overcoming altitude sickness, so even though I felt that the pace was really slow, I thought I'd better heed his advice.

Even after taking that precaution, I hit a major bump in the road. I had considered myself well prepared for the climb, but I nearly gave up on my attempt to summit Kilimanjaro when 24 hours before the scheduled day, I was hit with AMS (Acute Mountain Syndrome), severe diarrhoea and sleep deprivation.

Summit Day came and we prepared to start the ascent attempt at 11.30pm. The plan was to reach Uhuru Peak around sunrise at 6.30am, but due to my condition, I could advance only in small steps.

Sunrise came and I was still only halfway there. We saw a few climbers making their way down from the summit around 7.30am, but I tried not to let that discourage me.

My eye was still fixed on the prize - I told Dennis, no matter what, he would have to get me up Uhuru. I am so grateful to him for his patience and for allowing me to continue the climb.

I finally summited Uhuru Peak at 9.30am on Aug 10 - better late than never.

Many friends have since questioned my decision to take on such a trip, especially as a solo traveller.

I understand their concerns. Climbing a mountain and one like Kilimanjaro is not the safest thing you can do. If anything happens, you are far away from medical attention. But I was not exactly alone - I had a guide and crew.

So my question is, why not? Climbing Kilimanjaro was an amazing way to challenge myself physically and mentally. It was not a cakewalk but the process of setting a goal, giving my all and achieving it - that is not something you can put a monetary value to.

The trip also strengthened my belief in the benefit of occasional solitude. Being in a tent alone, out in the wilderness, under the stars, was strangely therapeutic. It seemed lonesome at first but I soon found a spiritual dimension to being on my own - I had time and space to think and reflect.

A huge plus of my adventure was that I made friends and got to know their culture and their way of life. It was humbling to know that porters and guides like Dennis risked their lives to accompany clients up the mountain, encouraged them, carried their equipment and earned only a small wage in return.

I admired their indomitable spirit and their smiles, how they treated me as family and did not try to hurry me along.

Last but not least, I don't believe I will ever have a better view of the Milky Way than from my camp on Kilimanjaro. No photograph can do justice to its awesome beauty - although I did attempt to take quite a few. Seeing the star-studded sky from my mountain vantage point was a chance in a lifetime.

- I flew from Singapore to Kilimanjaro via Istanbul on Turkish Airlines. From the Kilimanjaro airport, my guide picked me up and drove 45 minutes to the Machame gate where I began the trek.

- I booked my expedition with Barafu Tours and was impressed with the kind and supportive crew. The expedition cost depends on the number of people in the group, and can range between US$1,300 (S$1,844) and US$1,800.

- Go to http://www.barafutours.com/ for more information.