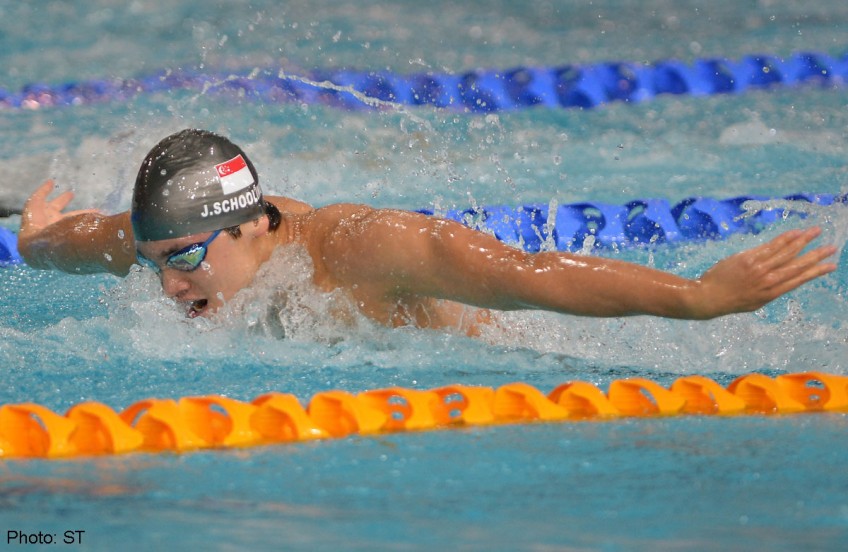 He was the most successful swimmer at the South-east Asia (SEA) Games in Myanmar last year with six gold medals.

But he wants more.

Don't be surprised if Singapore's swim king Joseph Schooling breaks that mark when the Republic hosts the SEA Games next June.

The 19-year-old University of Texas at Austin freshman is gunning for at least eight titles at the OCBC Aquatic Centre, but he has not decided how many events he will enter.

No male Singaporean swimmer has won more than six golds in a single edition of the SEA Games.

When asked his target for next year's SEA Games, the Asian Games 100m fly gold medallist told The New Paper: "Eight, maybe more? I am not sure yet, it depends on what I want to swim."

The Singapore quartet in the 4x100m medley relay was bumped up from second place after Indonesia were stripped of their title, as one of their swimmers, Indra Gunawan, was found guilty of doping.

The 50m fly was not offered in the SEA Games last year, but Schooling was the last winner in the event, in Palembang in 2011, with a Games-record time of 24.06.

While the 2012 Olympian is known for his fly and IM events, he could also gun for the freestyle, and even backstroke, titles at the upcoming SEA Games.

He has already made the SEA Games "A" qualifying marks for all three fly events and the 200m IM, as the Asian Games is used by the Singapore Swimming Association as one of the qualifying meets.

His gold medal-winning 100m fly time at the Asiad - 51.69 - places him ninth-fastest in the world this year.

The good - or scary, for his opponents - thing is that he is getting even better in Texas.

Training under renowned coach Eddie Reese - a two-time US Olympic team coach and the man behind the successful Texas programme for more than 30 years, the Singaporean is getting better by the day.

Schooling said: "The weight programme is the biggest difference between high school and college. At Bolles, we didn't do much, if any, weights."

"I feel a lot stronger than before and fitter."

There is also a concerted effort to improve his IM timing.

Reese told The New Paper in an interview that he wants to turn Schooling into a "world-class" swimmer in the event.

Schooling said: "I've kind of backed off (training for) the fly and started on working different strokes, especially my backstroke.

"Eddie (Reese) and I are confident that I can excel in my IM the same way I will for my other events."

Beyond June's SEA Games, the World Championships in Russia in late July will be a good gauge of his progress ahead of the 2016 Rio Olympics.

On his targets in Kazan, Schooling said: "Right now, I have my own goals and I know what I need to be at before going to Rio.

"Being in the final (in Russia) is definitely part of my goal, but that's all I'm going to say for now. I'm going to take one meet at a time."

This article was first published on Dec 25, 2014.
Get The New Paper for more stories.