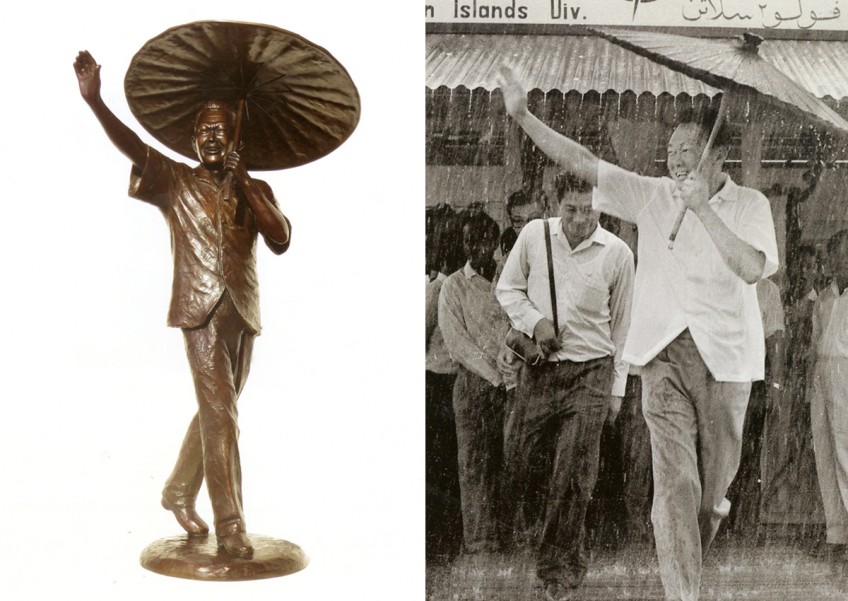 A 75cm-tall bronze sculpture of Singapore's late founding prime minister Lee Kuan Yew holding an umbrella stands out among artist Lim Leong Seng's 30 works at his exhibition now on at the Fullerton Hotel.

Lim, 65, says he was inspired to create the work based on a photograph in the pictorial biograpy, Lee Kuan Yew: A Life In Pictures, published two years ago.

The 1966 Straits Times photograph shows the then PM Lee braving the rain at the opening of a new People's Action Party branch at one of Singapore's southern islands, Pulau Bukum Kechil.

"I was moved by the photograph as it shows, symbolically then and for the next nearly 50 years, Mr Lee shielding the nation from difficulties and challenges as our leader," Lim says.

His show, Weathering Storms As One, which is also the name he gave to his Lee Kuan Yew sculpture, is his eighth solo exhibition since his first in 1976, and runs till Monday.

He started work on the sculpture last October and completed it in March this year, barely a week before Mr Lee died on March 23 at the age of 91.

"I didn't know he would leave us so soon after I completed the work, which I did out of my admiration and respect for him and his leadership," Lim adds.

The self-taught Singapore sculptor, a graduate in fabric design and silk-screen printing from the former Baharuddin Vocational Institute in 1970, also works with Chinese ink, oil and mixed-media collage.

He is known for his bold and experimental approach to art.

"I loved to do sculpture since I was young and as my father was a building construction worker, I had many materials in my kampung home to work with, such as clay and cement," he recalls.

He did not go big into sculpturing till the early 1990s, after his first big commission to create a 2.4m-tall bronze sculpture of a woman and her two children for a design-and- build Housing Board project in Tampines in 1995.

Other commissions came after that, including a similar family- themed sculpture for an HDB estate in Jurong East in 1997, and a stainless steel structure at Kallang River Park the following year.

He also did other sculptures for both public housing and private condominium projects, and a series of animal ones, including orang utans and elephants, for the Singapore Zoo.

In all, he has created 30 public sculptures.

In 2001, after he created live-sized bronze scultpures of early immigrants here depicting a Chinese coolie, an Indian milk seller and a Mid- Autumn Festival lantern procession for Telok Ayer Green, a park near the Central Business District, he developed an interest in the life and culture of early immigrants.

Scaled-down replicas of 13 major public sculptures by him are also on display at the not-for-sale exhibition.