SEA Games: For a safe and clean Games 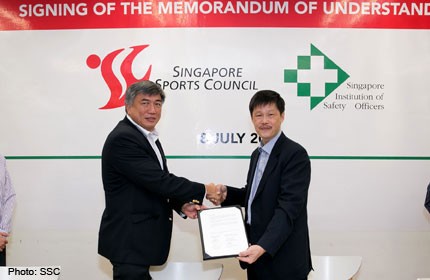 SINGAPORE - Last month's experience with the haze was anything but welcome in Singapore, but may well have been a blessing in disguise ahead of the 2015 South-east Asia (SEA) Games.

That is the view of the Singapore Institution of Safety Officers (Siso) president Seet Choh San.

After a break of 22 years, Singapore will host the biennial Games in 2015, and the local organising committee on Monday signed a Memorandum of Understanding (MOU) with Siso to look at all matters pertaining to safety for the event.

Said Seet: "We will never be able to predict what comes around in 2015... but (this year's haze) has gotten Singapore to be prepared as to what to do in this situation.

"So now if the PSI (Pollutant Standards Index) is 100 or more everyone knows what to do. With this haze we are even more prepared for 2015."

Singapore was hit with its worst haze last month. On one day, the three-hour PSI average reached a record high of 401, well above the 301 threshold for the air quality to be considered hazardous.

It raised huge concern as the Republic will host the 28th SEA Games in 2015 from June 5 to 16, traditionally the period where the nation is enveloped by the haze, which emanates from the burning of forest land in Sumatra, Indonesia, during the dry spell.

The MOU - the first for the 2015 Games - will go beyond just the management of the haze situation. The two-year agreement will see the development and implementation of risk management plans for Singapore's showpiece sports event of 2015.

Singapore South-east Asia Games Organising Committee (Singsoc) executive committee chairman Lim Teck Yin said: "It is most appropriate that our very first MOU should be signed around the subject of safety.

"The success of the Games cannot only be measured by the tone and amount of celebrations, by the medals that are won and by national pride, but also measured by the fact that the people would have come... with the confidence that their environment is safe and they will be able to do their job, enjoy themselves, and depart with a memorable experience."

"I think it's also very important from another perspective, where we would like to be able to co-create the Games with as many stakeholders as we can bring together," Lim, chief executive officer of the Singapore Sports Council, added.

"A very important element of success for this Games for us is the sense of ownership, where people feel that they have contributed to its success and participated actively towards that."

The risk management plans will cover Games infrastructure and programming, as well as the general health and wellness of all involved in the event in 2015.

As part of the MOU, Siso members will conduct pro-bono risk assessments of SEA Games venues from now till 2015.