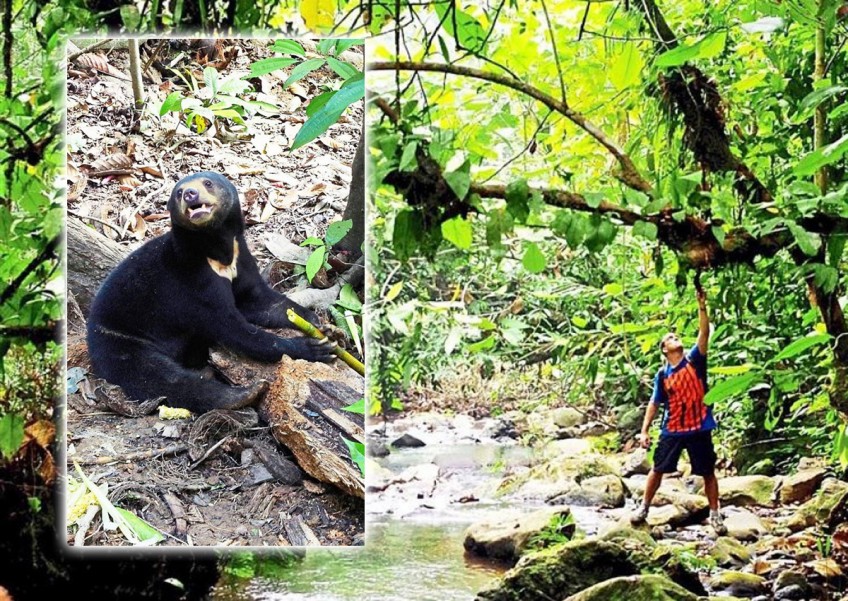 The waxy leaves are still dripping with last night's downpour when we sling on our rucksacks and head out on the trail from Tawau Hills Park to base camp, half way up Mount Lucia (1,189m tall).

The old cabin refuge lay on the high plateau of a forest-covered ridge, flanked on both sides by long plains of low-lying dipterocarp rainforest.

My friend Pavil assures us the bear we'd just heard (a Sun Bear, Helarctos malaynus) will sense us and run the other way.

"Unless it feels threatened or hungry, in which case it'll kill and eat us," he says.

Pavil once worked for the Sun Bear Conservation centre near Sandakan and is now assisting Oxford University in a study into the population distribution of the Sunda Clouded Leopard (Neofelis diardi) in Borneo. His team of local researchers collects camera trap data and reports the findings to the team at Oxford. The Sabah Wildlife Department will use the data to streamline conservation efforts here.

I've been invited to go with him to set up some of the cameras and see if there have been any sightings of the now vulnerable, mythical beast: an evolutionary link between big cats and small cats.

As we're traversing a narrow river, cutting away fallen trees with Pavil's old, duct-taped machete, I notice his calf muscles are those of a Russian gymnast. He forges the steep, clay-soil hillsides like a mountain goat, always finding a solid foothold.

The bulging calves and his vast wealth of conservation knowledge are the only things that distinguish him from any other Western day-tripper here. He wears a bright blue, XXL "I Love Chocolate" T-shirt, old Converse skateboard trainers and guzzles an endless supply of fizzy drinks.

After two hours of hacking our way along the trail, sweating heavily, we start to ascend the long eastern ridge that eventually forms the zenith of Mount Lucia. We stop part way up to drink and look out at a sweeping vista Pavil calls "Jurassic Park" country. The unbroken, lowland canopy stretches out across the plains. The golden sun shows the evening mist starting to settle in between trees.

We stand there listening to a billion-year-old silence grow older by the second.

"Here, even the dead trees are full of life," beams Pavil. It spills out of him through his wide eyes brimming with light, a gaze accustomed to great distances and a voice that swells with unbridled admiration for nature. It's as though he's constantly seeing the world for the first time, with child-like awe.

Our feet and the hours start to drag. Our packs get heavier and our heads lighter, filled with simpler thoughts. There is something of the ecstatic in exhaustion; in the literal meaning of the word ekstasis, from the Ancient Greek στασ: "to be or stand outside oneself, displacement of the mind" - from ek- "out", and stasis "stand".

Perception of time shifts. The topology of conscious-experience slides back a few thousand years from where atavistic fears slur their way into the body. From shadowed ground, a dark process seeds dreams.

The humidity starts to engulf you. All the senses swell. You seem to see snakes where only roots dwell. The silence wraps around and loosens every thing. You keep on walking. Something keeps walking on your behalf.

You find each solid foothold among the soak of leaves entirely by instinct. The deafening cicada shriek burrows into the bone. Somehow you arrive.

It's an abandoned cabin in a clearing. Tired and silent, your body already feels at home, migrating slowly back into the leaves and sky. Yes, the body feels at home amid the green and blue of mountains and rivers. Where the wind and the streams tell you your age and name. The light and leaves, you realise, are your true clothes and speech. Somehow you were always already here.

Peter Matthiessen, author of The Snow Leopard, referred to such experiences as a kind of "homegoing". Earth's household, it seems, is always waiting with open arms for its wandering prodigal sons of the earth.

There in the jungle, the smell of rot and genesis breathes you. Pavil opens the cabin door - more cracks than wood - slaps the dust off the mattresses and checks for snakes. I was drunk with exhaustion and Linnaean Latin (or scientific names) as Pavil had stopped to taste, describe and sniff every seed, insect and fruit we passed. I open a bottle of beer, still cold in my rucksack. It's gone in two unspeakably cool gulps.

On the porch in the evening sun, Pavil tells me about his new methods for camera trapping - they're based on indigenous hunting methods.

You lie down, mistaking night for death, on a mouldy mattress with mildew for a pillow - blanketed by midnight's starry shroud - and sleep like the one corpse you'll never see.

First light breaches the windowsill and pricks the eyes. Never once have I regretted going out early, rising from the warmth of a woman's arms, against fatigue or comfort to see the earth's naked sunrise, the trees fanning the morning sky.

When I set out on the trail we'll later take to Mount Lucia, Pavil is already awake and is running back down the hill towards me, wide eyed, holding something in his hand. It's reddish-green, pebbly and has the appearance of excrement. And it is.

But Pavil handles it with the same care as a white-gloved auctioneer would hold the Elgin Marbles.

"It's fresh" he says, inhaling the aroma "and, I'm pretty sure, it belongs to a Sun Bear!"

Continuing along the trail we stop to round a flooded pass and Pavil bends down to show me something. This time he's speechless. His eyes light up. I lean in to look. The paw print can't be more than an hour old. The wet mud still hasn't sagged around the claw tips. We look at each other and then up ahead and behind, scared and enraptured.

It's near. We're following it, risking death, and it's near. We talk loudly in order to scare it away. At one point we laugh and, a few hundred metres from the trail, a tremendous growl shakes the ground and our hair stands on end.

Man is by far the biggest threat to the Sun Bear population in Borneo. Habit destruction (tens of thousands of hectares of primary forest have been replaced by plantations) is not the only reason. Chinese traditional medicine still uses the bile and gall bladders of Sun Bears and it's not uncommon to find them in shops.

Places in Sabah like Maliau Basin, Danum Valley and Tawau Hills Park still have large swatches of primary rainforest and a bewildering diversity of wildlife, particularly insects and invertebrates.

The larger animals are stunning, too. The names alone are enough to wet the lips of any nature lover: Rhinoceros Hornbill, Bearded Pig, Red Leaf Monkey, Flying Lemur. The list goes on.

According to Junaidi Payne, conservation ecologist and author of Wild Sabah, over 3,000 tree species can be found in Sabah alone. Incredibly complex ecosystems exist among the closed-canopy rainforests here and it's as humbling as it is disorienting to walk among such grandiose, intricate biomes.

Doubly so, when you know there's a chance you'll cross paths with a wild bear, leopard, elephant or, equally enthralling, a middle-aged conservation volunteer named Pavil with fizzy drinks and stories to spare.