Shanti on fast track to success 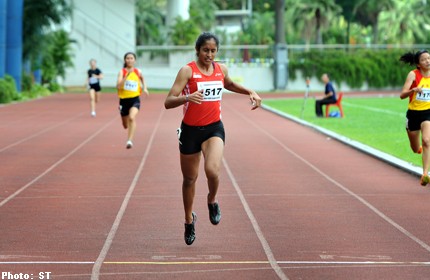 With proper planning, guidance, training and competition exposure, the SAA believes Shanti (above), who clocked 11.89 at the World Youth Championships on Wednesday, can be South-east Asia's best.

SINGAPORE - She has just been crowned Singapore's fastest woman after breaking the national 100m record on Wednesday, but the Singapore Athletic Association (SAA) is already predicting Shanti Pereira to be the future sprint queen of South-east Asia.

Said SAA vice-president and interim chief of sports development Loh Chan Pew on Thursday: "Shanti is a real diamond and we must groom her."

Loh, himself a former national sprinter, had coached Amanda Choo, the previous 100m record holder (12.01sec) before Shanti eclipsed it on Wednesday night (11.89) at the IAAF World Youth Championships in Donetsk, Ukraine.

He added: "She can definitely go faster.

"With proper planning and barring injury, she will be there to fight for gold in 2015 (when Singapore hosts the biennial South-east Asia Games)."

The 16-year-old clocked 11.96 in the women's 100m semi-finals on late Thursday night, finishing fourth out of eight runners in her race.

Despite failing to reach the final, Shanti is the first Singaporean woman to post a sub-12 timing under legal wind conditions, repeating the feat twice in as many days and both times with a slight headwind no less.

Prema Govindan had clocked 11.83s at a meet in the United States in 1988, but the timing was not recognised then as the race was held with strong tailwind.

Shanti's timing on Wednesday meant, pending ratification by SAA, she had set five new marks - the national open, Under-23, national junior, youth and Under-19 - in one go.

The teenager said: "Everyone has been waiting for me to break the record, so there has been a bit of pressure."

"But I didn't really think about it and just stuck to everything that I've been doing."

She has yet to meet the qualifying mark for this year's SEA Games in Myanmar - set at 11.73, the bronze medal mark from the 2011 Indonesia Games - but Loh feels the high level of competition at the Games will benefit her.

"It's important that she gets to compete this year, to see for herself how her competitors run," said Loh, who also proposed overseas training stints in places like Germany or the United States.

SAA is counting on the women's 4x400m team to make the qualifying mark, after which they will be free to enter Shanti for both the sprint events.

Said president Tang Weng Fei: "Shanti has enormous potential and she's still very young. I will definitely recommend her for the individual 100m and 200m for this year's SEA Games.

"But we also have to be patient with her (in the coming years). It's obvious she still has a lot of scope and we expect her to do well.

"But we must also be careful not to push her too hard."

Meanwhile, Ang Ding Hui clocked 14.42 in the men's 110m hurdles to finish seventh in his heat.