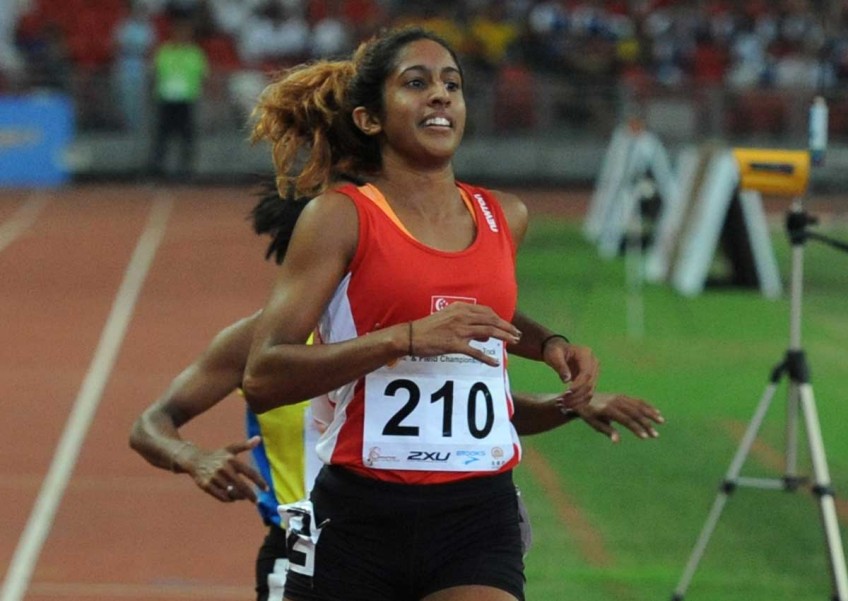 Shanti Pereira running in the women's 200m final in the 78th Singapore Open at the National Stadium yesterday. She clinched her first gold of the meet with a time of 24.04sec.
The Straits Times

There is something about the National Stadium that brings the best out of Singapore sprint queen Shanti Pereira. The 2015 SEA Games 200m champion returned to the scene of her biggest triumph so far to win the women's 200m final yesterday at the 78th Singapore Open.

Her chance of going to Rio de Janeiro on a wildcard entry has been blocked owing to marathoner Neo Jie Shi's qualification but former national sprinter and record-holder C. Kunalan urged Shanti to not give up her hopes for August just yet.

Kunalan, the Singapore Athletic Association (SAA) vice-president, said: "Shanti came so close in her 200m race. She has no reason to stop thinking about Olympic qualification. Why must it be impossible to qualify? Shanti can still break the Olympic marks and be able to represent us - there's still time."

However, Shanti is looking further ahead, saying: "The Asian Games is definitely on the cards for me in 2018, and hopefully the 2020 Tokyo Olympics.

Meanwhile, the male wildcard entry is still open to athletes with the likes of Zubin Percy Muncherji and Calvin Kang in the mix.

Kang, who took part in yesterday's 4x100m men's relay and finished fifth, said: "Currently, there's different selection criteria and the last I heard, they (SAA) want to nominate someone who hasn't been to the Olympics."

Kang represented Singapore in the 2008 Beijing Olympic Games after being given the wildcard and competed in the men's 100m.

The 26-year-old added: "That might not give me the chance to go to Rio but I'm not sure. I'm just going to give my best this season and let my legs do the talking."