She's daring when it comes to fruit & films 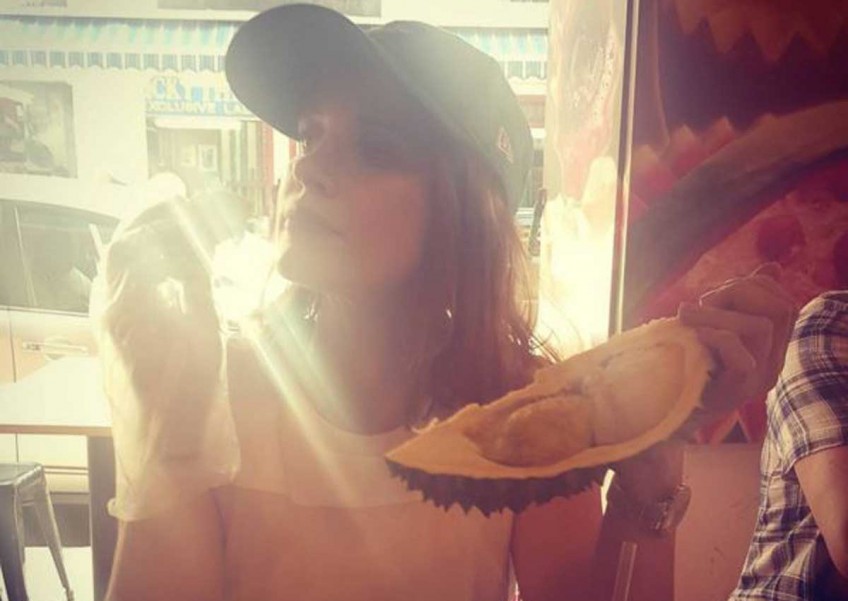 While many consider the fruit smelly and repulsive, it is her favourite.

The 39-year-old wasted no time indulging herself upon arriving in Singapore for The Huntsman: Winter's War publicity tour.

The redhead's love affair with the fruit started over a decade ago when she was in Thailand filming the miniseries Blackbeard.

"I was in Thailand for four months and discovered the fruit there, and immediately fell in love with it," she said at the film's press conference yesterday.

"I had it when I was in Singapore a few years ago. Actually, every time I come to Asia, I'll make sure I'd eat it.

Chastain is also adventurous when it comes to film projects. She is known for dramatic roles in films such as Zero Dark Thirty (2012), Interstellar (2014) and last year's The Martian.

"I approach it as how I'd approach any film," said the two-time Oscar nominee, adding that she spent about five weeks doing stunt training in New York and London.

Co-star Chris Hemsworth, 32, was impressed by her ability to take on all the fight sequences.

"Jessica was fantastic, and making it more impressive was that she did all of her fight scenes in high heels," said the Australian, best known for playing Thor in the Marvel films.

"I remember being blown away after watching the first big fight sequence we had. She made it look so easy," he added, laughing.

He said: "We are lucky we got the chemistry right. Jessica and I have a lot in common, so we just hit it off."

Chastain chipped in: "You got to be open with your co-workers.

"You can't expect to have chemistry if you go back to your trailer or leave the set after every take.

"We all hung out on set and so we got to talk a lot and were able to get to know each other better."

As to whether fighting Hemsworth or kissing him was more difficult, Chastain laughed and said: "Fight scenes burn more calories."

This article was first published on April 5, 2016.
Get The New Paper for more stories.