Shochu like whisky? Well, have a taste of this drink 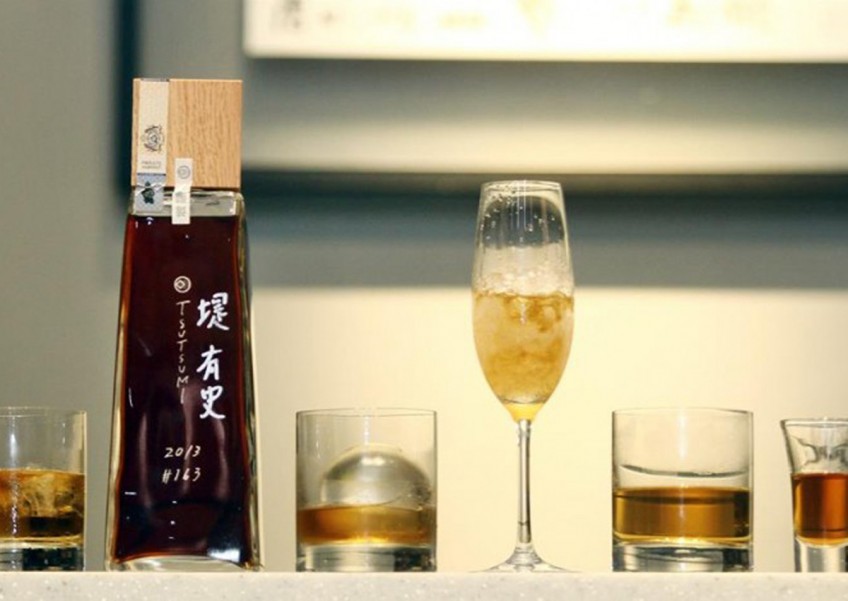 Japanese whisky may be the hottest product in the whisky world right now, but the country's biggest traditional spirit product is still shochu, a distilled spirit that can be made from several different produce, including rice, barley, sweet potatoes, buckwheat, and so on.

According to website SakeExpert.com, shochu was first made in the southern region of Japan around the 15th century.

While "shochu" (which literally means, "burning wine") is the generic term used to refer to the spirit, there are actually several types of shochu. Amongst this is "Kuma shochu", which is a category that is protected as a geographical indication by the World Trade Organisation, just like Scotch whisky, tequila, cognac, and Bordeaux wines.

Made from 100 per cent rice grain and using clear water from the underground stream of the Kuma River in its production process, only shochu made by the 28 distilleries located in the so-called "Shochu Valley" at Hitoyoshi-bonchi (in the Kumamoto Prefecture on Kyushu Island, Southern Japan) can be called "Kuma shochu".

Among these 28 distilleries is Tsutsumi Distillery, which has over 137 years of shochu-making traditions. The distillery's shochu master, Tsutsumi Kazuhiro, was recently in Kuala Lumpur to introduce his shochu at an event at Kampachi Pavilion, as part of the restaurant chain's Kampachi Sake Dinner Series.

The shochu he introduced us to, however, was no ordinary Kuma shochu. Called Gokujyo Tsutsumi, it is a Kuma shochu aged for ten years in oak sherry casks; much like whisky makers tend to do. Like a single cask whisky, it is drawn straight from one single barrel. Each bottle of this "shochu-whisky" is unique, numbered and according to Tsutsumi, bottled at its peak for optimal enjoyment.

"One barrel will have about 600 bottles, and each bottle with have the number of the cask on the label," said Tsutsumi.

According to him, barrel-aged shochu is quite rare. "Pure shochu tends to be a bit rough, so we usually mature it in vats or jars first," he said. "Our distillery has been ageing our shochu in barrels for more than 50 years. Because our shochu is made from rice, the flavours from the barrel are more dominant."

The result is a fairly unique spirit that has all the flavours of a good whisky, but remains, fundamentally, a shochu.

During the event, guests got to pair a specially curated, five-course Kaiseki pairing menu by Kampachi's chef, Kyosuke Nishimura, with the five different ways the shochu-whisky can be served - neat, with an ice ball, with soda water, with crushed ice, and mixed with water warmed to 50°C.

Neat, the Gokujyo Tsutsumi smells almost exactly like a nice, sherry-matured whisky, but with subtly sweet rice notes. On the palate, it is easy and light, with a very delicate, fruity flavour, and an obvious sherry oak influence. Most commercial shochu tend to burn a little, but this has mellowed out wonderfully. Here, the flavour of the wood dominates the palate, but you do get the more subtle rice notes from the shochu on the finish.

It may not be a whisky per se, but based on its flavour and uniqueness, this is a spirit on par with what some of the best Japanese whiskies have on the market (and that quality is reflected by the price: about RM875 a bottle).

When taken with ice, the chilled serve seemed to bring out more of the shochu's rice notes, making the shochu more prominent than the neat serve, which had more of the wood influences.

Of the five serves, the crushed ice was the least memorable, as the ice melted far too fast in our warm climate, resulting in a drink that tasted like whisky-flavoured water. The soda water and ice serve faired better, especially if you like the refreshing whisky highball drink that is so popular in Japan.

The most interesting serve of the night, however, was the one with warm water. According to Tsutsumi, this is one of the ways that traditional shochu is served. The warm water brings out a nice, heady whisky-like aroma that is just lovely, while in the mouth, there is a nice balance between the sherry wood notes and the rice shochu that is not as apparent in the colder serves.

I have to say, Gokujyo Tsutsumi was quite an eye opener for me. While it may seem like an attempt to cash in on all the hoopla surrounding Japanese whisky these days, the actual product is refined and unique enough to hold its own. If you love shochu AND whisky, this is the perfect drink for you.