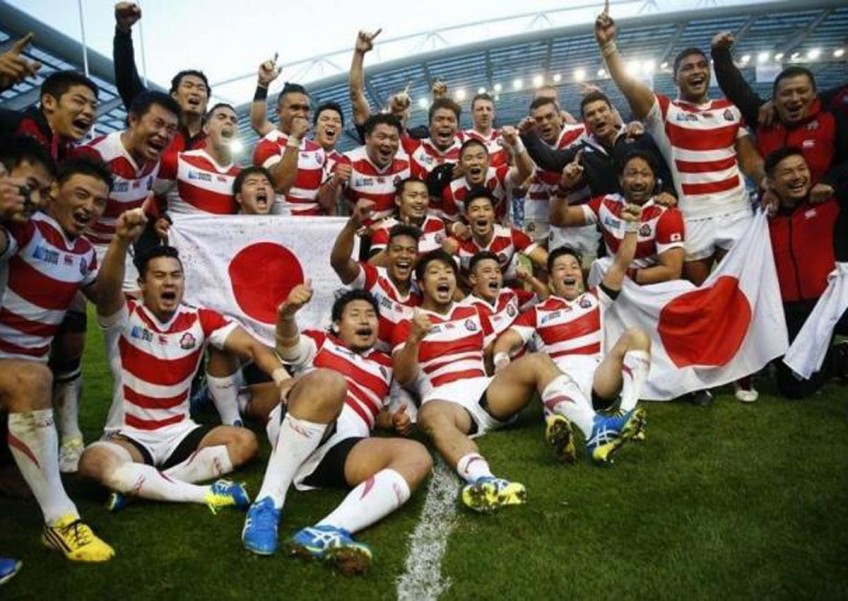 CARDIFF - The shockwaves from the greatest upset in the history of the Rugby World Cup continued to reverberate on Monday as the eighth edition of the tournament took a breather after a dramatic opening weekend.

As bumps and bruises were patched up, squads trained and teams were named in preparation for the resumption of matches on Wednesday, Japan's 34-32 victory over South Africa remained a central topic of conversation.

For the powerhouse nations that have long dominated rugby, it was serving as a salutary lesson about the dangers of complacency.

"Perhaps South Africa underestimated them. I don't know," said New Zealander John McKee, coach of the Fiji side who take on twice champions Australia on Wednesday.

"It shows that the gap between tier one and tier two is closing. It also shows what can be achieved if you stick to a game plan and play to your strengths."

Michael Cheika's team selection for Australia's Pool A opener in Cardiff reflected that philosophy as he chose to play David Pocock and Michael Hooper, both openside flankers, in his back row.

France's Philippe Saint-Andre, one of several coaches wrestling with short turnarounds between matches, rested all but two of the starting team from their 32-10 opening win over Italy for Wednesday's Pool D match against Romania.

Wales coach Warren Gatland would dearly love to have such a luxury as he eyes a blockbuster encounter with England on Saturday that could go some way to deciding which of the two countries will progress from Pool A.

In yet another injury setback for the Welsh, centre Cory Allen, who scored three tries but was one of six players hurt in Sunday's 54-9 win over Uruguay, was ruled out of the tournament by a hamstring injury.

The England camp, however, were determined not to be lulled into thinking that the Welsh injury crisis would make their old rivals any less competitive at Twickenham.

"We know we are going to get the best from Wales," scrumhalf Richard Wigglesworth said. "We are under no illusions about how tough it is going to be."

Whether Scotland still belong in the game's top tier after a good few lean years is debatable, but it is to the 1991 semi-finalists that falls the task of restoring the old order when they meet Japan in Gloucester on Wednesday.

Coach Vern Cotter recalled fit-again fullback Stuart Hogg to his inexperienced side for their Pool B opener and said that Japan's victory would have little impact on how the Scots prepare for the game.

"They will have taken a lot of confidence from their opening win over South Africa. However, that doesn't change our approach to this game or the pool," he said.

"The priority for us is to ensure that we get our jobs right with accuracy and impose ourselves on the game."

Japan coach Eddie Jones made six changes to his side from the team that wrote itself into the history of the game last weekend.

"If the players can't get excited after Saturday I don't know what's going to excite them. Motivation is not an issue," the Australian said.

A more palpable impact on the game from Japan's victory came when South Africa fell to sixth in the world rankings, their lowest ever position.

A sign of what it means for the game in Japan came when World Rugby's chief executive, Brett Gosper, tweeted that the tournament's merchandise store in London had been forced to pull down its shutters early on Sunday because of overwhelming demand from the Japanese public.