Should you ever give money to a beggar in the streets?

May 23, 2016ByTimothy HoDollars and Sense 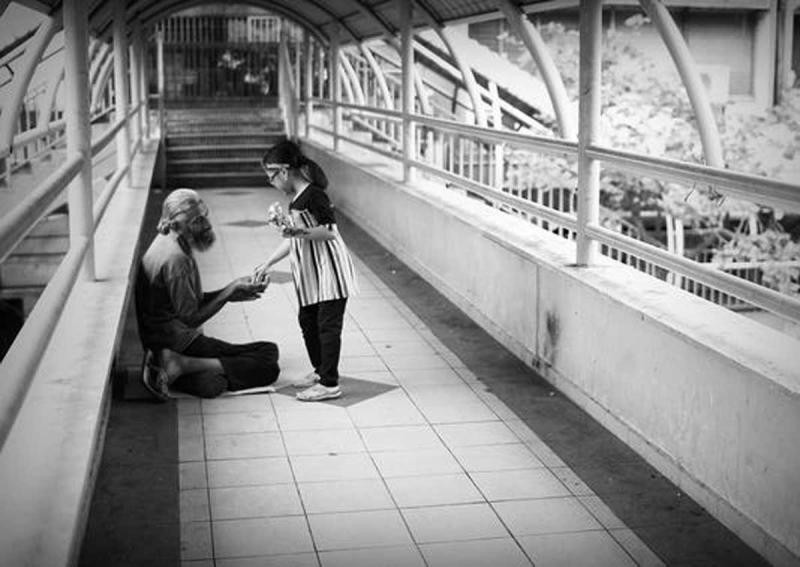 This age old debate recently pop up in our mind during our overseas travel. In the developed nation that we visited, we saw a couple of beggars in the street. The majority of these beggars were older people, seemingly extremely poor and dishevelled.

For some, giving some money to these beggars is a natural thing to be doing. When we know we can help the life of someone, even for one day, or just one meal, it is not easy to turn away from doing so.

However, the question is, are we really helping these people?

There are those who genuinely have no way of providing for themselves, and have to resort to begging as a last resort. This would include those who are physically disabled or have mental illness, which makes it impossible for them to hold a conventional job.

The other category that beggars fall into can be further split into two sub-groups.

Group 1: Those who could have worked, but decided to beg instead

In one sub-group, you have people who could have secured a job if they had wanted to, but who decided that securing a job is too difficult, given the payoff they can expect to receive from it.

For example, getting a cleaning job may only pay them $600 a month on a part-time basis, but requires significantly more physical effort. On the other hand, begging gives them a similar amount given the same number of hours put in as long as they beg at the right place, and at the right time.

The other possibility is that people who could have possibly acquired new skills to land jobs in the future (e.g. picking up computer skills for data entry jobs) decide not to do so because the alternative (i.e. begging) provides the same returns for lesser effort. What happens thereafter is a situation where begging becomes a better option in the short-term compared to spending money on an education in the hopes of landing a job.

If this is not addressed, we end up having mini-communities of people who just beg for a living.

The other sub-group would be professional beggars. These are people who are begging as a career simply because they are good at getting people to give them money for it. In the UK, a beggar by the name of Simon Wright was able to collect earn more than £50,000 (about S$100,000) a year by begging. He is not the only one. All over the world, there are professional beggars in both developed nations such as the US & UK, as well as developing nations such as India & China.

This article talks about how most beggars in tourist areas in Thailand are likely to be professional beggars.

The problem with giving - Asymmetric information

If all of us are equipped with glasses that immediately tells us who the truly needy are, then the problem of whom we should give money to goes away.

Unfortunately, we do not have this ability. That means whenever we give money to a person begging in the street, be it locally or overseas, we are giving only based on our superficial observation on whether we think the person is genuine. And that's an observation that can easily be sway by outer appearances.

Even if we were only giving to those who are indeed genuine, that act of giving would encourage others who are not in absolute need to join in the fray, instead of looking for other alternatives. When they do so, those who are truly needy would be crowded out by these new people. In economics term, we like to call these people the "lemon".

If the problems of begging were only restricted to differentiating between the needy and those who are not, then perhaps we can work out a solution or live with the knowledge that some of our money may go to people who don't always deserve it.

However, things do not just end there. A terrible effect that extensive begging creates in the community which it exists in is that it naturally evolved into begging syndicates, or as we prefer to know them as, begging gangs.

In places like Thailand or China, begging has evolved into a business. And we are not just referring to professional beggars going around making quick bucks from unaware tourists. We are talking about gangs forcing young children, mothers with babies, and even kids who were smuggled from their families overseas to be forced by gangs to beg for their survival. These gangs amputate their victims so that they become better beggars, since as we explained above; a person who is physically disabled is likely to get more money.

When we give money out of our generosity, we like to think we are helping the helpless where in actual fact; we are actually making things worse. Unknowingly, we are encouraging, even supporting, these illegal and sinister activities. It's like giving money to support prostitution and drugs without even realising what is it that you are doing.

Begging in different countries mean different things. In developing nations, it might be a way of life, or a need for survival. It may also be a begging syndicate at work. Is the kid with the missing limbs part of a syndicate?

Should we give instead to the old people who have all their limbs intact instead? Or would they also be part of the syndicate. There are no real ways of telling the differences.

If you see someone whom you truly want to help, it is worth spending some time to talk to the person as well. Most of the time, monetary support is what they seek for but not necessarily what they only need. Perhaps they need community support, maybe a link up to welfare organisations that could provide for their daily meals and even help them get a job.

Like it or not, giving a token sum and feeling good about ourselves is not likely to be the good, sustainable support that these people need. If we want to make a difference in someone's life, we need to be vested in it. Otherwise, we could just be making things worse without even realising it for ourselves.

The better alternative would be to give to charities of your choice. Thereafter, try link up the needy people whom you know to these charities. It may not solve all the problems that these people have, but it would be better than just passing them money.

We also want to emphasise: never give money while you are overseas because you never know what the actual situation is. More likely than not, you are a target for begging syndicates.