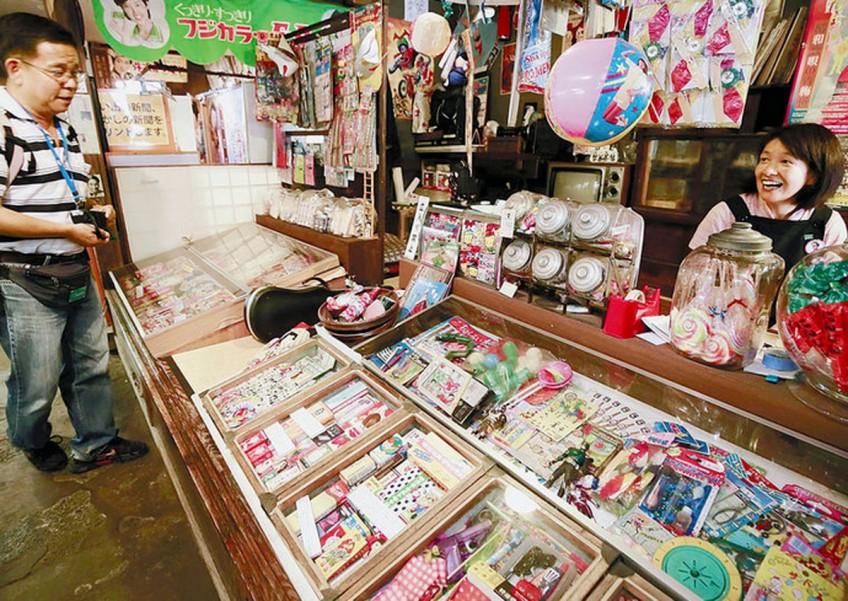 As I opened the rattling slide door at the entrance to the wooden building with a tiled roof - once home to a furniture shop - my trip back to the Showa era (1926-1989) immediately began.

Decades-old enamel signs popped into view for merchandise like the carbonated Oronamin C Drink and Bon Curry, the first boil-in-the-bag product to hit the market in Japan.

There was also a bicycle with a kamishibai picture-story show set on its luggage carrier.

Further inside is a replica of a mom-and-pop dagashiya candy store. In the shiny black display cases, you will find Glico caramel - known for its "[calories required to run] 300 meters in a single piece" catchphrase - and the unforgettable Cocoa cigarette candy.

Paper balloons and squirt guns were also on display and Kamen (Masked) Rider and Ultraman figures too.

There are about 25,000 products and packages from the Showa era on display. All were collected by the museum's director, 80-year-old Hidetoshi Yokokawa, who thought, "I should hand down to posterity things that are taken for granted but will eventually be lost."

Most of the items were donated from collectors in Tokyo, Osaka, Gunma and other prefectures.

One particular standout is a cigarette package with illustrations of boxers and gymnasts to commemorate the 1964 Tokyo Olympics.

The museum is literally crammed with relics. Yokokawa looked around and beamed as he said: "These empty boxes would've been discarded a long time ago, but now in the Heisei era, they serve as important indicators of how we lived during the Showa era."

Even more nostalgic are the old movie billboards, which decorated streets until around 1970. The billboards on display are painted works by Bankan Kubo, 74, who is known as "the last movie sign painter."

Portraits of silver screen stars such as Kanjuro Arashi, Chiezo Kataoka and Yujiro Ishihara were painted with color wash, a type of pigment that fades when exposed to wind and rain.

There are few orders for hand-drawn movie billboards nowadays. "The techniques of a billboard painter are bound to disappear. I just want people to come here and appreciate the handicraft of artisans who were often seen on the streets," Kubo says.

The artisans' spirit can be felt from these works.

The museum also has a collection of silk hats, carrying bags and other personal effects that once belonged to Fubuki Koshiji, considered the leading chanson singer of the Showa era.

The museum is planning to hold a special exhibition of these items, which were donated by Koshiji's family.

Retro Museum of Packaging from the Showa Era

Established in 1999 by Hidetoshi Yokokawa, a former variety shop owner, to revitalize the local commercial district.

Donations from collectors of Showa goods are always welcome. Lafcadio Hearn's ghost story "Yuki-onna" (Snow woman) was set in the city of Ome, and related material is on display in "the room of the snow woman" on the second floor.

Next door is the Ome Akatsuka Fujio Kaikan, a museum dedicated to the works of manga legend Fujio Akatsuka.

Hours: Open from 10 a.m. to 5 p.m. Closed Mondays (closed Tuesday if Monday is a holiday)