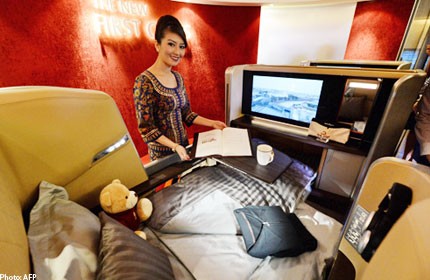 SINGAPORE Airlines (SIA), in the face of increasing competition from rivals, believes "a great way to fly" has become even better after it unveiled its first major cabin upgrade in more than five years yesterday.

There will be more leg room for economy travellers, with seats providing better back and neck support. And the in-flight entertainment screen is now 11 inches - one more than before.

Those in business class get extra storage space, and what the airlines claims is the industry's widest full-flat bed. First class passengers will also enjoy a bigger bed, more privacy and a 24-inch screen.

From September, travellers on flights between Singapore and London will be the first to experience the upgrade, which is initially being rolled out on eight new Boeing 777-300ERs at a cost of US$150 million.

The improvements, which were undertaken by two world-renowned design firms - BMW Group subsidiary Designworks USA, and James Park Associates, which is based here and in Britain - will also be included on the airline's new Airbus 350 jets, which will start joining the fleet in 2015.

How much of an impact will the upgrade have?

Mr Brendan Sobie, a Singapore-based analyst at the Centre for Asia Pacific Aviation who was at the launch yesterday, said: "I would not say this is a game-changer. It's more of a product evolution." Mr Mak did not deny this.

"We don't define advancement in terms of just 'wow', and we won't have a superlative 'wow' for every product generation. It's about what customers want and need," he said.

"What we have is a product that has been very well received, which we have made much better in terms of the comfort and functionality, as well as look and feel."

But constant upgrading is critical amid an intensifying dogfight among airlines for market share, Mr Mak told The Straits Times, adding that SIA had already begun working on its next round of improvements.

"In this business, if you are staying still, you are actually moving backwards as your competitors catch up," he explained. "Our product innovation department is kept working all the time. Today, they are here to show off what they have done. Tomorrow, they will go back and continue with the work for the next generation."

Despite a slowdown in the premium travel sector which has hit profits, carriers like SIA, Cathay Pacific, British Airways and airlines from the Middle East are continuing to invest in new products and services. This is why SIA is already working on the next generation of products for mid-haul flying, as well as the Airbus 380 superjumbos, said Mr Mak.

But it goes beyond just hardware. Equally important is a good network with convenient connections and high service levels on the ground and in the air.

He said: "We are confident the premium business segment will recover and demand will return. When it does, we intend to be firmly in a position of leadership."