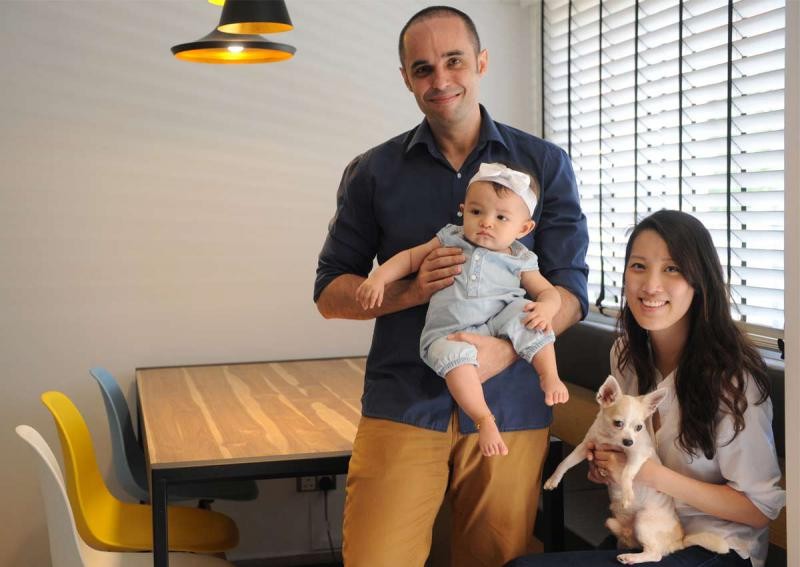 Entrepreneur Gregor Gregersen has lived all over the world after leaving his native Germany, including in Italy, England and the United States, but he now calls Singapore home, thanks to inspiration from former prime minister Lee Kuan Yew.

Mr Gregersen, 40, first arrived in early 2008, feeling restricted in Europe and seeking a business-friendly environment that encouraged entrepreneurship. "After two trips backpacking around the world, I moved to Singapore, the most entrepreneur-friendly country I could find."

He had chanced upon Mr Lee's book From Third World To First: The Singapore Story and was so inspired he decided to move here.

"While flying from Europe to Singapore in 2007 for a business trip, I read Mr Lee Kuan Yew's book. Mr Lee's vision for Singapore made a lot of sense to me and I started to plan to move to Singapore.

"Reading the book allowed me to understand how well Singapore was governed. I was so fascinated with Singapore that I did research on the country and compiled it into a PowerPoint presentation to share with my German friends and colleagues."

Eight months after reading the book, he found a job with a German company that allowed him to work from Singapore.

He would later join Commerzbank - as a data architect building compliance and other financial systems - where he worked from mid-2008 until 2011.

During his stint, Mr Gregersen, who holds degrees in finance and information and decision systems, returned to Germany for a while and it was there that he saw the Lehman crisis in 2008 unfurl.

"I was working in Frankfurt, in the trading room, when the crisis happened. I saw first-hand how fragile the financial system was, and there was no trust in handling money.

"You could see a lot of people were buying physical gold and silver, but by the time I decided to buy a bit of silver, it was too late because it was sold out."

He visited 12 different stores in Frankfurt before finding silver in the gift shop of the European Central Bank. The difficulty he went through led him to the idea of selling physical silver.

"Silver was more attractive to me. People always talk about gold, but if everybody wants to buy gold, it means it's quite high. Now the one ounce of gold can buy you 75 ounces of silver, and silver has started to be used in a lot of electronics."

In his early days here, he also realised that there was no bullion dealer to buy investment-grade silver from in the Republic.

When Mr Gregersen got his Singapore permanent resident status in early 2009, he decided to start his own bullion dealership.

"I wanted to test the local markets on the reception for silver and have some revenue before committing to fixed expenses of a rented office. I would buy silver coins and bars and transact with local buyers at MRT stations."

The firm now has its own 9,500 sq ft precious metals vault called The Safe House, deemed one of the two world-class vaults in Singapore by IE Singapore.

Mr Gregersen said: "I'm proud that seven years later, as of early 2016, we had over $330 million worth of sales and have delivered over 6.5 million troy ounces (about 200 tonnes) of silver and gold in Singapore."

The firm set up a gold- and silver- backed P2P (peer to peer) lending platform in August last year that allows borrowers to unlock capital from the precious metals stored with the firm.

The platform has now facilitated more than $10 million, across more than 300 successfully matched loans.

Mr Gregersen, who has an 11-month-old daughter named Daenerys with his wife Michelle, 29, says he is now more focused on his business rather than on active trading. "I used to be passionate about high finance and even worked at a bank structure product desk programming custom derivatives with 'quants' - those with math PhDs.

"I spent years building banking applications and software systems, and I'd always looked for my own thing I could do, and it all came together when I built the website and then the business."

A My dad was working for IBM for a long time, and he set up a vacation business in Italy, which was how I ended up growing up there.

He bought up and renovated all these farmhouses, making apartments out of them.

My mum had to move to Italy to take care of the business, and we'd rent the apartments out to Germans who'd come for vacations for a week or two.

My dad was always quite in debt due to these investments. I had enough money to pay for rent but I never had a lot of cash on me. I had to work for it.

We were fortunate that the business grew and we had 40 apartments by 2005.

A When I was 16, and I bought my first stock when I was 17. Those were the days before the Internet, so it was a lot harder. I had to buy the newspaper every day and look at the prices, back in 1992.

I figured if I bought the right things, then I'd have my money working for me so I didn't need to work. It was simple logic to me and so obvious back then. You get interest, and when you have enough money, you get more interest, and then you don't have to work.

Along the way, I figured it was better to save early, save more money, so I could kind of buy my freedom to do whatever I wanted later. I always had it in me.

I also made mistakes. Before Windows 95 came out, I bought call options on a memory maker. It did well and I thought I was doing well and decided to invest in something else, but it turned out wrong.

When you think you're doing it well, you tend to get careless. I spent two months checking the newspaper every day. Every time it went down, I had a bad day. I was so happy when the options expired because I didn't have to think about them any more.

I learnt about the concept of sunk cost that day, and there was no point in thinking I shouldn't have bought the options. From that moment on, I didn't get angry when I made a mistake. That's something everyone in investing has to learn.

A I am primarily an entrepreneur and my investment style would likely be best described as "alternative" or "value".

Having experienced the 2008 financial crisis from the inside, I have become a lot less optimistic about our financial system overall.

I believe that there is a big need for alternative store of values, such as physical investment-grade bullion that has minimal counter-party risks and can be directly owned, not owed, and stored outside the financial system.

I believe that few people understand the extent of the systemic risks that we will be facing in the future. Very few people properly assess counter-party risks.

Essentially, I am betting that the financial system will experience a big systemic crisis. I am positioning myself and our customers to be protected and profit from it.

I believe in long-term fundamentals and have a contrarian streak. If everybody thinks something is good, then it probably is not a good investment any more.

Very rarely, I find some long- term technical trends of interest, such as the 30-year gold-silver ratio.

I find silver undervalued currently but given my pessimistic overall outlook, I think that having cash and waiting for the right opportunity is not a bad idea.

A My majority ownership in Silver Bullion is conservatively worth around $10 million, but I would not want to sell this. My personal physical bullion holdings would be another $1 million at current valuation.

I also invested about $400,000 in loans on Silver Bullion's gold- and silver-secured P2P loan platform which is giving me a return of about 5 per cent per annum. I have mostly closed my bank accounts in the United States, Germany and Italy.

Q What does investing mean to you?

A It's about my time and effort, as opposed to money. Take, for example, five things you could do, and all those things are good for you. You may have the money to do all five, but only the time and effort to do two. At that point it's not about money but you have to decide what is important to you.

A When I was living in California in 2003, I paid Air Combat USA US$1,400 to fly as co-pilot in an aerobatic propeller plane and experienced for myself air-to-air dog-fights. It was very exhilarating.

A Growing Silver Bullion is my priority. I want to expand the business while helping investors understand the importance of securing wealth in physical gold and silver in a safe jurisdiction like Singapore.

Due to my busy schedule, I do not have the time and effort to invest in something that requires frequent follow-up on a short term basis. I like precious metals because I can hold them for the long term.

A Strangely, I have been thinking about retirement plans since I was 15. I've always saved money so retiring is no issue.

But I will never really retire. When you run your own business, there is so much to do and new things to learn. I always need to do something and I get very bored when I'm not doing anything.

A A Housing Board maisonette in Ang Mo Kio with my wife and daughter.

A I take the bus. It's more convenient.