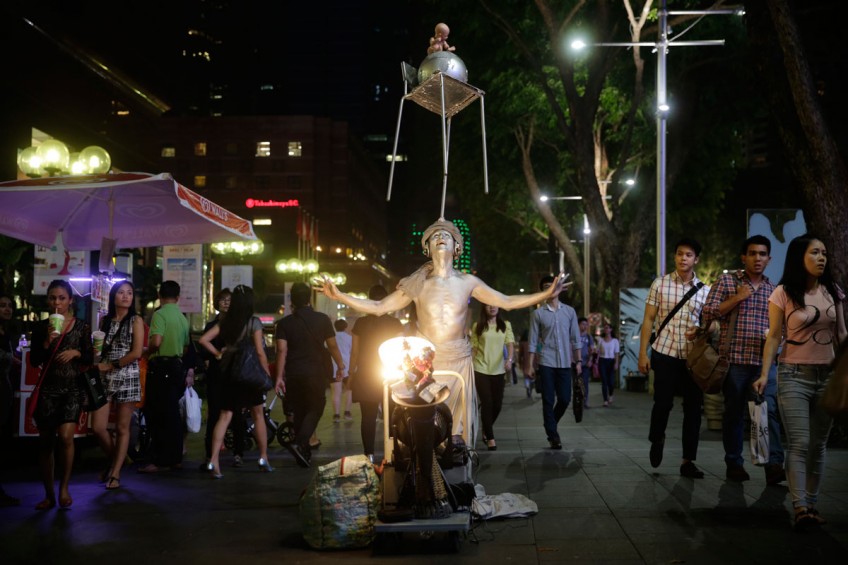 You may have seen him on the streets, and had to do a double take.

With his whole body and face painted in silver, busker Roy Payamal cuts a striking figure.

Standing still for as long as two hours in Orchard Road, Waterloo Street or Tampines Central, he acts as an angel, ghost or statue; other times, he mimes, and moves with music amid flashing neon lights.

For the young ones, he is Ouch The Clown, who juggles and squeezes himself into a giant balloon, and at corporate events, he walks on stilts and eats fire.

Over the last 30 years, thousands of people would have walked past him and paused, or given a quick glance over their shoulders at his street performances.

But few people know who the real Roy Payamal is.

Better known as the "Silver Man", he gets a thrill from being the centre of attention, and the adrenaline rush sees him through his performances throughout the night.

The 51-year-old recovers from the exhausting performances by sleeping in - he does not wake up earlier than 11am every day, and largely sleeps through the weekends, for instance.

And he guards his anonymity fiercely. He has stopped performing in Ang Mo Kio, where he lives, because he does not want to be recognised by his neighbours.

Said Mr Payamal: "I like to have my cup of coffee in a coffee shop quietly, and while I am an extreme extrovert when I perform, I choose to separate my performing personality with my real life.

"That is because, should one day I were to break a leg and be unable to perform, I still have my identity, and can be myself."

And while he is constantly surrounded by people, being a performer can be incredibly lonely.

"One of my saddest moments was when I was standing in front of a crowd performing, and everyone was clapping and showing their appreciation. And, all of a sudden, I felt lonely.

"It felt like everyone was busy going about their lives when I was in my own bubble, thinking I was happy being with strangers," he said.

"It's weird because you have friends, and you have family supporting you. But sometimes, even in a room full of people, you feel like you're all on your own."

Contrary to popular assumptions that buskers are struggling artists, Mr Payamal said he makes enough money to pay the bills.

The income gives him a "comfortable" living, and there is even enough to put some money aside for a rainy day. However, he declined to reveal exactly how much money he makes.

Mr Payamal, who attended the now defunct Punggol Vocational Institute, left school when he was in Secondary 2. He started practising to perform when he was six, balancing badminton rackets on his palm and watching circus shows on TV. By the time he was 12, he could balance a chair on his chin.

During his national service days, he got lucky and was roped in as an actor and comedian in the Singapore Armed Forces Music and Drama Company.

While others dug trenches and carried rifles, his job was to make other soldiers laugh.

"Entertaining allows me to get into the creative flow and to make people happy," said Mr Payamal.

After his NS days, he became a salesman and hotel bellman because his family did not approve of busking. However, he continued to do children's and theatre shows on the side. He quit his regular job to be a full-time busker in the late 1980s.

"When I started, I was not a sad or happy clown but, maybe, an angry one. Rebelling became my purpose to perform as I was angry with the conformity and materialism of the world," said Mr Payamal, who is single and lives with his mother.

"But over the years, as I interacted with the audience during breaks at Orchard Road, my perspective shifted, and I saw things more positively. For example, the branded goods in shop windows now remind me of creative design rather than commercialism."

Over the years, his art has taken him to places like Mongolia and France. He said he constantly thinks of new ideas to improve his craft.

He will be starring in a film called Singapore Minstrel, which will be shown in this year's Singapore International Film Festival. The movie is based on his busking life.

"Some people see busking as a stepping stone to something else, such as a famous career in singing or acting," said Mr Payamal.

"But for me, busking is my achievement. My audience on a single day in Orchard Road can be bigger than those at the Esplanade.