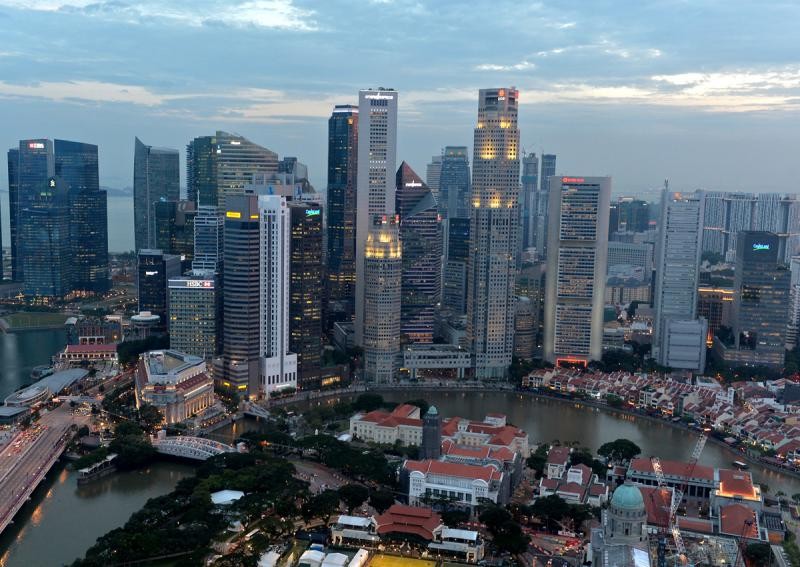 Singapore banks are due to report their first-quarter results this month, and given the weakening economic environment, analysts are now flagging a rising risk from small and medium-sized enterprises (SMEs) amid slowing growth.

The cool outlook for Singapore banks comes despite easing risks over oil prices as they stabilise - with banks earlier stress-testing their books at US$20 per barrel. Since mid-2015, shares of Singapore banks have been highly correlated with oil prices, and they have bounced higher in tandem with the higher oil prices.

UBS analyst Aakash Rawat said in a report this month: "The risks from the oil and gas exposures are better understood now; risk from SME exposures look underappreciated though."

Citing the tepid business outlook for SMEs, he noted that UOB commands the highest share in the SME market, and that the bank's risk weights for corporate lending has correspondingly risen faster than average in the last few quarters. UOB is his least preferred stock of the trio.

"The resilience in the SME sector and less-than-expected impact on the banks' asset quality so far has been rather surprising. We think this might be changing at the margin and looks like an imminent headwind."

Analysts remain worried that Singapore banks will still come under pressure from oil and gas exposure.

Morgan Stanley in a report this month: "We now believe that Singapore banks have seen the benefit of this oil price recovery, and further progress will be much tougher.

"The recent rise in the oil price no doubt helps the global majors; it has also allowed some refinancing of the US shale producers, but it is unlikely to alter the overcapacity issues in the support-services sector, which is where the Singapore banks' credit concerns have focused."

At a shareholders' meeting this month, OCBC chief Samuel Tsien said that if oil prices stabilised at US$30 to US$40 per barrel, most OCBC customers would be able to ride through this industry downturn.

Mr Wee added then, that China's rebalancing from manufacturing to services will be beneficial in the long run, backed by increasing connectivity within Asia.

Still, in China, where DBS in particular has significant exposure, many firms in the industrial sector are grappling with massive overcapacity issues, said Andrew Wood, head of Asia country risk research, BMI Research.

"While it is unlikely that Singaporean banks have much direct exposure to such firms, they do have exposure to China's top-tier banks, which are vulnerable to rising NPLs (non-performing loans) from the growing number of firms that are unable to service their debts," he said.

Other analysts have taken it easy. S&P analyst Ivan Tan pointed out that risks from China will fall, as the majority of exposure here is through trade finance, which is short-term in nature. That has shrunk considerably, and is because the arbitrage trade that benefited from the cheaper borrowing rates for offshore yuan has run off.

"It's a self-correcting risk," said Mr Tan. He also sees no danger from the property-cooling measures and the impact on mortgage delinquencies. Despite more workers being laid off last year and taking a longer time to find new jobs, Singapore remains statistically at full employment. The Sibor (Singapore Interbank Offered Rate), used to price floating home loans, has also fallen as the Federal Reserve holds off rate hikes, he noted.

"Our outlook for Singapore banks is one of stability," he said.

HSBC said in a report this week that the first-quarter results "should reaffirm the asset-quality resilience of these banks". HSBC analyst Loo Kar Weng said: "We expect negligible increases in NPL ratios, with marginal impact on credit costs. Market concerns could shift away from asset quality to growth."

Loan growth for the full year is expected at around 5 per cent, at best, analysts said.

Morgan Stanley will also keep an eye on the impact of more regulations on dividend payouts. The introduction of new rules to measure credit risk on derivative counterparties and market risk could add up to 10 per cent to risk-weighted assets, it said, though noting that rules are still uncertain.

The Monetary Authority of Singapore will on Wednesday release its macroeconomic review that will touch on the banking sector.

UOB releases its first-quarter results on Thursday; OCBC does so the following day, and DBS, on May 3.

This article was first published on April 27, 2016.
Get The Business Times for more stories.