Singapore cooks to turn up the heat on MasterChef Asia 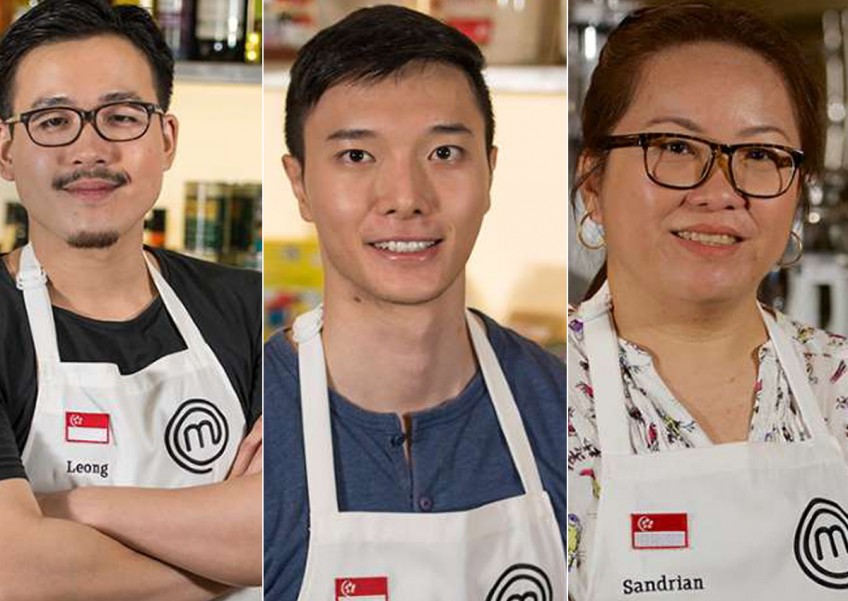 Now that popular TV cooking contest franchise MasterChef has an official Asian spin-off, Singaporean viewers can finally see some of their fellow countrymen sweat it out in the MasterChef kitchen.

In the inaugural season of MasterChef Asia, three Singaporean home cooks will be putting on their aprons to vie for the coveted title, which comes with a cash prize of US$50,000 (S$70,370).

Singaporean engineer Lennard Yeong, 27, housewife Sandrian Tan, 41, and lawyer Woo Wai Leong, 27, will join 12 other home cooks from around Asia, including Malaysia, Vietnam and Indonesia, to take on pressure tests and group challenges in their race to become the first MasterChef Asia.

While the main kitchen scenes are shot at Singapore's Infinite Studios, the contestants will also be seen cooking at off-site locations around Singapore and Hong Kong.

Life meets the three local contestants to find out more about them.

Why did you want to join MasterChef Asia?

Mr Woo: I've always been a big fan of the original UK MasterChef and wondered what it would be like to be a part of it. When MasterChef Asia came about, I went on Facebook to ask my friends whether I should join. About 80 people said, "Yes, definitely". That push was enough to get me to join.

Mr Yeong: I joined out of curiosity. I watch MasterChef Australia once in a while and, when you're cooking at home, there's only a certain level that you can reach. Joining a contest like this would help me take my cooking to the next level.

Ms Tan: I'd been wanting to join a cooking contest for a long time, but I always felt I was not good enough. Then, my mother died two years ago and it made me think about why I'm always having reservations. I figured I should just live life, so I decided to go ahead and join MasterChef Asia.

How long have you been cooking?

Mr Woo: Since I was a kid - maybe from my late primary or early secondary school days. I would help my mum in the kitchen, chopping and washing vegetables and, before I knew it, I was cooking alongside her.

Mr Yeong: I've been cooking for about three or four years. I learnt a lot from cookbooks and YouTube. I have an interest in eating, so I wanted to cook good food to eat.

Ms Tan: I grew up in a kampung in Siglap and I was always in the kitchen helping my mum with the cooking.

My father is Singaporean and my mum is Thai, so we used the mortar and pestle a lot in our household. I could cook as soon as I could hold the pestle and start pounding away.

What goes through your head when you have to do a Mystery Box challenge, where you have to cook on the spot with a bunch of surprise ingredients?

Mr Woo: I think I just give in to the moment when I open the mystery box. It's easy to think too much, so you just have to pick a few ingredients that shout out to you and try to work from there.

Mr Yeong: The hardest part about the mystery box is having to do things instantaneously and thinking on your feet. It can get chaotic in your mind, but I try to filter everything else out and focus on the task.

Ms Tan: I just think, "So, what goes with what?" And you can't just think of the easy way out. You have to think of making something that is worth the one hour that you have to make it, so that you can impress the judges.

What ingredients would you put inside the mystery box for the other contestants to work with?

Mr Yeong: I'll be nice and say shellfish. My thought process isn't so complex. I just like to cook what I like to eat.

Ms Tan: I would put in cincalok.

Mr Yeong: (Laughs) Wah, Sandrian is clearly out to give us a hard time.

What would your last meal be?

Mr Woo: I enjoy the simple things. One more bowl of bak chor mee or a huge steak would fit the bill. You want something that's moreish and comforting for the last meal, things that bring back memories.

Mr Yeong: I think I would go to the hawker centre and order six or seven dishes which I grew up eating, to share with my family.

Ms Tan: I wish I could have my mum's wild vegetable spicy soup again. She always said it was easy to make, but we have no idea how she made it. Now that she's gone, I'm trying to recreate the dish. It hasn't been as easy as she said it was, but I hope I'll get there eventually.

This article was first published on September 2, 2015.
Get a copy of The Straits Times or go to straitstimes.com for more stories.