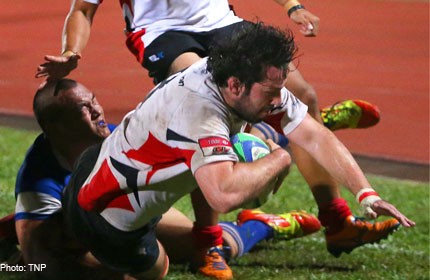 Singapore No.8 Peter McFeely (in white, with ball) forces the ball over the line in the 76th minute to score Singapore's fifth try against Chinese Taipei at the Yio Chu Kang Stadium.

Singapore continued their good progress when they beat Taiwan 30-19 in the first international rugby Test match on home soil in three years in the Asian Tri-Nations last night.

The Singapore Reds' win at the Yio Chu Kang Stadium saw them leapfrog their opponents into 56th place in the world rankings.

It has been a good year for the Singapore Rugby Union (SRU), after the national team regained their place in Division One of the HSBC Asian Five Nations (A5N) tournament in June when they beat Malaysia 20-17 in the Division Two final.

Speaking to The New Paper after the final whistle, 29-year-old Chow said: "We didn't really dominate as well as we wanted today.

"Overall, I'm not terribly happy with the performance, but I'm glad we won and that we're moving up the rankings.

"We have won three Test matches on the trot. Hopefully, we can build on that next year and get promoted to the top division."

Singapore got off to a bad start yesterday when Chiu Min-ching gave the visitors the lead with a try after seven minutes, which Chu Chih Wei converted.

An injury within the ranks of the hosts changed the complexion of the game.

Reiner Leong came on in the 17th minute for an injured Erik Vis and the prop had been on the pitch for barely five minutes when he scored a try.

Leong did it again on the stroke of half-time and Singapore went into the break 12-7 up.

Capped for only the third time, Leong rounded off a remarkable individual performance when he completed a hat-trick in the 55th minute to make it 17-7.

"It was wonderful (to score the second try) and it was just the best feeling," said the beaming 27-year-old.

"They were all team tries and this wouldn't have happened if the team hadn't worked together.

"I can't take credit for the tries. All I can do is give credit to the team for giving me the tries."

Taiwan pounced on some slack passing to score an unopposed try two minutes later and followed it up with another in the 72nd minute to set pulses racing.

A 64th-minute penalty conversion by Suhaimi Amran and a Gabriel Lee try in the 68th minute gave Singapore some breathing space.

With the score at 25-19, Singapore No. 8 Peter McFeely sealed the win in the 76th minute with the final try.

The Test was marred by a lengthy stoppage after Taiwan's Chen Tsung-wei was stretchered off following an altercation with Singapore's Andrew Bourke.

Complaining of neck pain, Chen was sent to hospital in an ambulance along with Chung Kang-lin, who was substituted at half-time.

The Reds started the tournament last Sunday with a gutsy loss to a Hong Kong selection side 35-25, but they have ended it on a high.

While he was happy with the win, SRU technical director Inoke Afeaki felt his men got a little sloppy at times.

He said: "It was the result we wanted. I'm not particularly pleased with the way we went backwards after the performance against Hong Kong.

"The main thing is that Taiwan came out here and played much better than they did against Hong Kong (HK beat Taiwan 67-5).

"They made it a really tough battle."