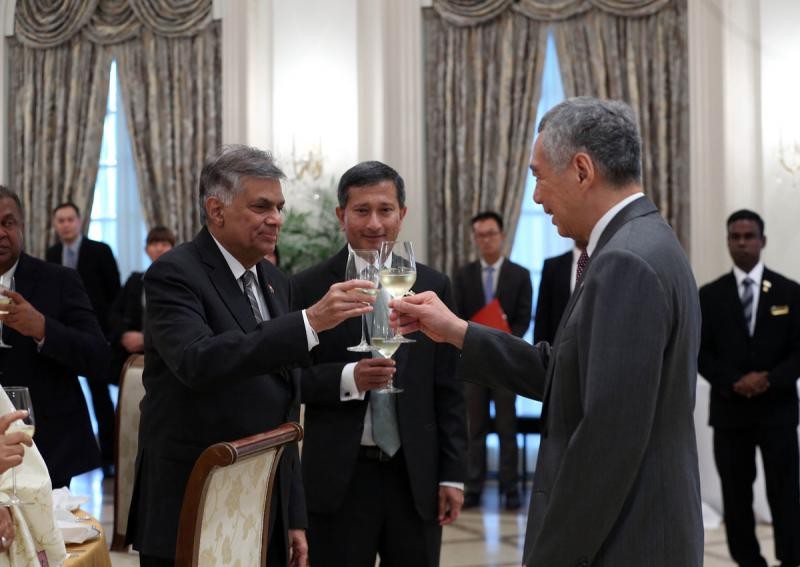 Singapore and Sri Lanka started work on a free trade agreement (FTA) yesterday and agreed to deepen collaboration on multiple fronts, from urban planning to the training of public officials.

A number of agreements were signed by officials from both governments as part of an official visit here by Sri Lankan Prime Minister Ranil Wickremesinghe.

The headline agreement to start work on a free-trade deal was signed at the Istana by Mr S. Iswaran, Minister for Trade and Industry (Industry), and Sri Lankan Minister of Development Strategies and International Trade Malik Samarawickrama.

Prime Minister Lee Hsien Loong said later in his toast during lunch: "When we complete the FTA, it will be a boost for companies and investors from both sides.

"I am optimistic that with strong political backing, our negotiations will be concluded quickly."

Mr Wickremesinghe added: "There is tremendous scope for us to work together in a win-win situation, because the next centre of growth is going to be the Indian Ocean region."

Singapore has already been running workshops for Sri Lankan urban planners on topics such as masterplanning and urban greening.

Trade agency IE Singapore signed an agreement yesterday that will see it collaborating with Sri Lanka on catalysing growth and connectivity in the country's planned Megapolis, which aims to merge capital Colombo with major cities in its Western Province to form a single economic zone.

Singapore is also working with Sri Lanka on skills development and training.

The Civil Service College will train two batches of Sri Lankan officials in public administration and governance, while the Institute of Technical Education will train senior officials in the field of technical and vocational education, with the first workshop commencing next month.

The main imports from Sri Lanka include petroleum oils, precious and semi-precious stones, and tea.