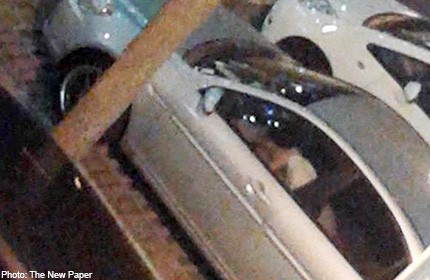 SINGAPORE - The couple were having sex in their car in an open-air carpark. And when they realised that somebody had spotted them, they panicked and tried to drive off.

But in their haste, the driver ran up the carpark kerb. They then sped off.

A witness, who wanted to be known only as Miss Tay, said: "I think he was too shocked and accidentally reversed the car. I even heard a crash sound."

The incident happened in the early hours of Sunday at the carpark near Block 5, Aljunied Road.

Miss Tay, 24, an engineer, said that she, her friends and her cousin were on their way to her flat at about 12.15am after having supper when she chanced upon the car.

She was just about to enter the lift when she spotted the couple, whom she described as middle-aged and "fat".

She told The New Paper: "Although it was dark, what they were doing was quite obvious."

Miss Tay added that she didn't dare to tell her friends and cousin about what she saw until they were in the lift.

"It would have been stupid to have told them when we were still downstairs as one of them could have seen us staring at them," she said in Mandarin.

Once upstairs, Miss Tay and her cousin watched the couple for a good 10 minutes from the corridor.

Disgusted by what they saw, her cousin snapped a few photos of the couple. But the man spotted them and tried to make a quick exit.

Said Miss Tay: "I just think it's very weird and disgusting. Why would they do such a thing at such an open place?"

Couples who have sex in public, even within the confines of their car, risk breaking the law, if someone sees them and makes a complaint.