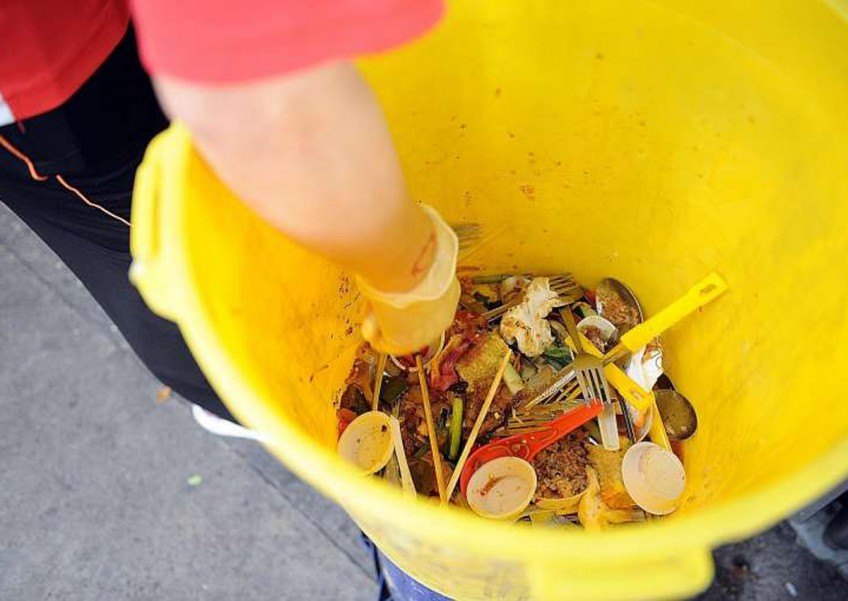 A survey of 1,016 people conducted from January to July this year found that 80 per cent of respondents are bothered about having to throw food away.
The Straits Times

Food wastage has increased in recent years, with the average person in Singapore dumping about 146kg of food last year - or the equivalent of 29 packs of rice.

One in four people admits to buying more food than is needed, said a new survey. Most of them do so to ensure household members have "more than enough" to eat, said the survey commissioned by the National Environment Agency (NEA) and Agri-Food and Veterinary Authority (AVA) released yesterday.

"Overall, the results showed that the awareness of food wastage is high, but more can be done to motivate consumers to take action to reduce food wastage," said NEA and AVA in a joint statement.

To encourage people to cut food wastage, NEA is launching a campaign using posters and educational videos that compare the cost of food wastage and what the money could be spent on otherwise. These will be shown on digital and mobile media platforms, at bus-stop shelters, in newspapers and on TV.

A focus group discussion held after the survey found that consumers are more likely to waste food when dining at home than eating out, as they tend to buy more than what they eventually consume. Many tend to shop on impulse, buying food items on promotion, for instance, instead of referring to checklists and meal plans.

The campaign will thus include customised educational materials on how to reduce food wastage at home. An online guide will be available to provide suggestions on things such as meal planning.

NEA will partner supermarket chains like Sheng Siong and FairPrice, as well as the Subway sandwich chain, to place posters and table-top stickers on their premises to remind consumers not to waste food.

The campaign, which will be expanded to schools early next year, adds to NEA's efforts to cut food wastage. These include pilot pro-jects to convert food waste into compost or water at two hawker centres, expected to be launched next month.

Mr Kavickumar Muruganathan, head of eco-certifications and lead environmental engineer at the Singapore Environment Council, said that while change will take time, the campaign is a good start.

"Greater receptiveness by industries and the public towards providing and accepting food donations would also be a step in the right direction," he said.

This article was first published on Nov 21, 2015.
Get a copy of The Straits Times or go to straitstimes.com for more stories.