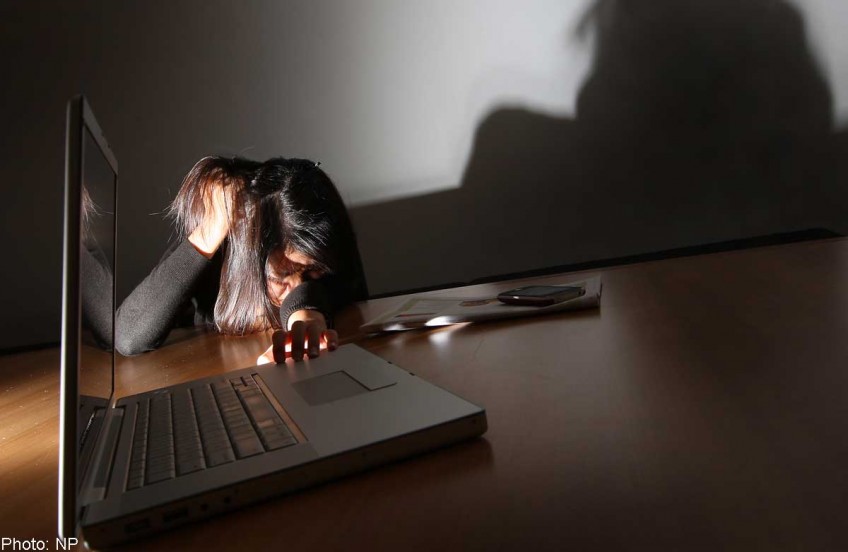 One in four secondary school students admitted that they have bullied their peers online within the past year, a poll has found, while one in three said they have been victims of cyber bullying.

These ranged from spreading rumours or vicious remarks about a person on social networks, to “defacing” a person’s picture and then circulating it online.

One in five primary school children, too, reported being “cyber bullied”.

The survey of 3,000 secondary school students and 1,900 primary pupils was done by Touch Cyber Wellness, the main agency that runs online safety talks in schools here.

The data on the prevalence of cyber bullying in Singapore was collected over the last year after a 2012 Microsoft study found that Singapore had the second highest rate – 58 per cent – of online bullying worldwide, after China. The two countries were the only two of the 25 surveyed where bullying online was more pervasive than in the real world.

“There will be more bullies because cyber bullying has become more common over the years and such social behaviour is being normalised,” said Ms Esther Ng, president of volunteer group Coalition Against Bullying for Children and Youth (Cabcy).

In 2006, Cabcy did a study which found that one in four primary and secondary school students suffered online bullying at least once in their lives.

The rising number of online bullies is worrying, said Mr Chong Ee Jay, assistant manager of Touch Cyber Wellness, because its victims may suffer from consequences that are potentially more serious than face-to-face bullying.

“On the Internet, the taunting and rumours can be relentless over 24 hours and this information can even come back to haunt one in future,” he said.

“The potential audience is much wider and so the shame or emotional trauma suffered can be more intense than actual physical injuries,” he added.

Indeed, a study on the consequences of bullying on Singaporean youth, published last February in the International Criminal Justice Review, had found a “significant link between bullying victimisation and school truancy and suicidal thoughts”.

It is not only the victims who suffer. A 2007 study done in the United States found that teens who have been bullied and the bullies themselves are almost twice as likely to have attempted suicide than those who have not been.

So why do these teens become cyber bullies when it does not pay?

Observers think the less-developed impulse control and social skills of the young may play a part when they navigate cyberspace.

“They are egged on by their peers and act out in the heat of the moment,” said Mr Chong.

Ms Ng said some children do not realise the reach and impact that their words can have online.

“The cloak of anonymity can also change the mildest of people into terrible bullies because they feel emboldened and powerful,” she added.

Others ironically become bullies after being victims of cyber bullying. Mr Chong said he once came across a group of primary school girls who used to ignore the online flaming done to them by another group. But the attacks became worse over time and they decided to retaliate and humiliate the other group by altering their pictures and posting them online.

Counsellors said the new harassment law passed in Parliament this year is an important step in deterring such cases of cyber harassment. Those who are the targets of false and malicious online content can similarly get orders requiring the content to be taken down and for correction notifications to be published in their place. Victims can also sue perpetrators for civil damages.

Apart from resorting to legal recourse, Touch hopes parents and educators will keep up with the latest trends so as to better guide their charges. Together with SingTel, it launched the first cyber wellness app here last week for parents to get tips from experts.

For Ms Ng, it is equally important to rope in witnesses of online bullying to speak up against such behaviour. Cabcy is currently doing a study with about 1,000 tertiary students to find out why bystanders do not come forward to help the victims.

“For every kid that is bullied online, there are at least two or three more who would have seen it and could have done something,” she said.

“We need more positive voices to intervene and set the norm.”

Parents who want to find out more about what their children get up to in cyberspace can now do so while on the move.

In popular lingo, the term “noobie” refers to a novice.

The free app aims to be a one-stop information source to help parents better understand and protect their children from online risks.

Parents can be kept in the loop about the latest cybertrends in six key areas via the app: gaming, social media, cyber bullying, inappropriate online content, mobile technology and online privacy.

In each section, there are resources such as game reviews and real-life stories of young people who had to grapple with online bullying or online scams and pornography.

“Many parents have told us that they are often clueless about their children’s online activities. Yet, they are and should be the first line of defence when their children run into problems,” said Mr Eugene Seow, executive director of Touch Community Services.

The app is available for download on the Apple iTunes and Google Play stores.