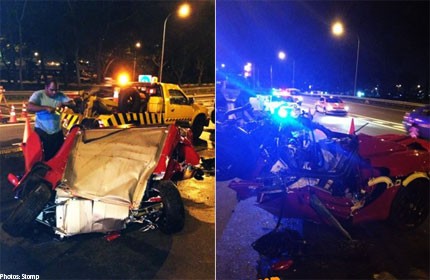 SINGAPORE - A man was killed after a Lotus supercar crashed into another vehicle on East Coast Parkway (ECP) on Saturday morning.

The man was pronounced dead by paramedics while two male drivers were conveyed conscious to hospital in the aftermath of the horrific three-car accident.

A Stomp contributor sent in a report of the accident, as well as photos that showed off the mangled remains of two of the cars.

A spokesperson for the police said:

"The police received a call at 12.01am requesting for assistance near the 18km mark along the ECP heading towards AYE.

"Upon arrival, it was established that an accident involving 3 cars had occurred.

"A man in his 30s was pronounced dead by paramedics on the scene.

"I came across an accident that took place along the ECP near Prince Edward Road, in the direction heading towards AYE at around 2.30am to 3.30am earlier today (Jul 13).