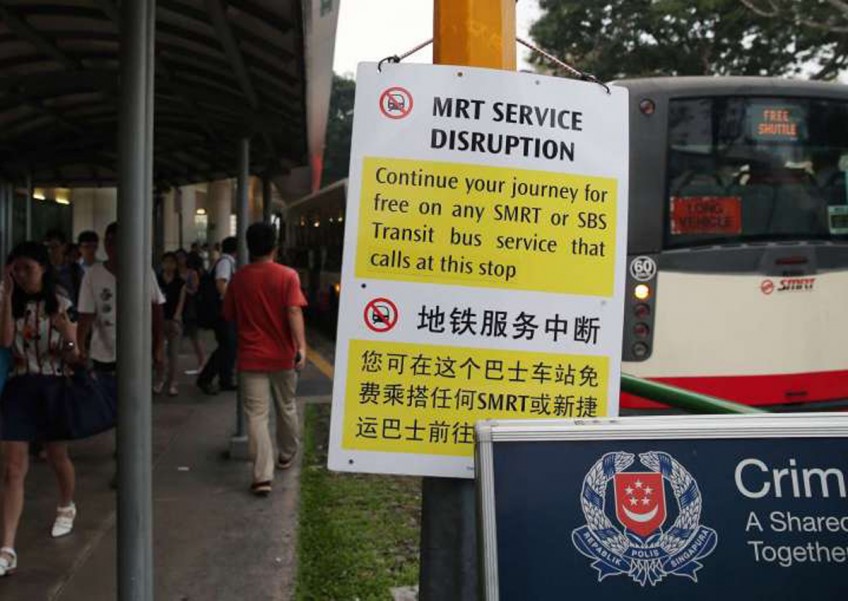 Ten students were late for an A-level examination yesterday morning after a disruption on the North-South Line affecting about 70,000 commuters.

The three-hour English literature paper started at 8am yesterday.

Some 1,600 students were registered to take the examination, said the Singapore Examinations and Assessment Board (SEAB).

It added that these students were given the full duration of the paper and assured exam candidates that they would not be penalised for being late because of the train disruption.

SEAB said it has contingency plans to deal with events that may disrupt the conduct of national exams. It works with schools to remind candidates to plan for sufficient travel time and to report at least half an hour before the start of an exam.

Candidates are also informed before the exams that, in the event that they cannot reach their schools in time due to a train disruption, they can sit the exam at other schools near MRT stations. A list of schools has been put up at the MRT stations and is also available on the SEAB website.

University students who are in the midst of their exam period were also affected by yesterday's two-hour disruption caused by a faulty power breaker.

The Singapore Management University (SMU), which held exams yesterday morning for 14 courses, said that 37 students were affected by the train disruption.

Professor Pang Yang Hoong, SMU's vice-provost (undergraduate matters and student development), said the students were given the full duration for the exams.

The National University of Singapore (NUS) pushed back the 9am start time for 40 exam papers by 30 minutes, upon receiving news of the train service disruption.

About 3,740 undergraduate and graduate students were involved in these papers.

An NUS spokesman said a small number of students arrived at the exam venues after 9.30am, but they were given the full duration to finish their papers.

At the Nanyang Technological University, all exams yesterday started as scheduled at 9am. The school said that only a handful of students were affected by the train disruption.

SMU information systems student Yeo Wen Da, 23, who was late for his computational thinking exam, said: "I was waiting for buses opposite Yishun MRT station but could not get on any of them."

Singapore Institute of Management-University of London student Malcolm Hwa, 25, who was making his way from his home in Yishun to his school in Clementi, arrived in school more than two hours late.

He said: "Yishun bus interchange was a sea of people... All free feeder services were practically drowned by the continuous flow of people."