Mr Wong Kan Seng, chairman of the S Rajaratnam Endowment, speaking at its launch yesterday, flanked by (from left) Mr Bilahari Kausikan, Professor Chan Heng Chee and Dr Teh Kok Peng. The endowment will partner civil society groups, think-tanks and the private sector to implement domestic and regional programmes in order to foster growth and cooperation in the region. Its flagship programme will be the annual Singapore Forum, to be launched next April.

A $100 MILLION endowment has been set up by Temasek Holdings to honour the late Mr S. Rajaratnam, a founding father of Singapore who played a pioneering role in the country's foreign policy.

In striving to keep alive his beliefs, the S Rajaratnam Endowment will seek to deepen regional ties, a crucial backdrop to achieving economic cooperation and development in the region.

Such strong links will bring peace and stability to the region, said Mr Wong Kan Seng, chairman of the endowment, at its launch yesterday.

This is especially pertinent amid "a tumultuous era in world history with profound and momentous shifts of power and ideas under way", added the former deputy prime minister.

The United States, China, Japan and India are seeking a "new equilibrium" with one another, he said, while South Korea, Australia and Russia also have interests in the region.

"The next phase of Asia's growth will see more complex and greater challenges in geopolitics, changing demographics, income disparities and the competitive use of resources.

"It is thus important for all stakeholders to reinforce the foundations for sustainable growth in the region," he told an audience that included former president S R Nathan and former senior minister S. Jayakumar.

To help foster growth and cooperation in the region, the endowment will partner civil society groups, think-tanks and the private sector to implement domestic and regional programmes.

Its flagship programme will be the annual Singapore Forum, which will be launched next April with the theme: Asia And The World - New Growth, New Strategies.

Dr Teh Kok Peng, a founding director of the endowment board and chairman of business park developer Ascendas, said: "We hope to take a forward-looking and problem-solving approach in which (international) policymakers and business leaders can discuss the opportunities, issues and challenges facing the region and the policy responses required."

The endowment will also partner Singapore Polytechnic for the Youth Model ASEAN Conference to be held in December this year.

About 200 youth leaders from ASEAN countries will gather for four days to discuss matters including economic, security, social and cultural issues.

The endowment will also support programmes that recognise the work and contributions of Mr Rajaratnam, in areas such as social development, culture, literary arts and journalism.

Said Mr Wong: "Our basic approach is to be as broadly inclusive as possible, while holding firmly to our core values."

Man who 'dared to dream' 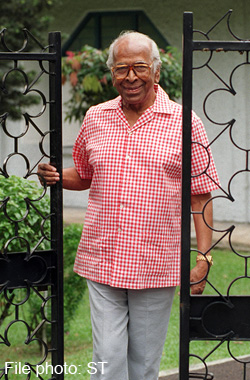 He was also committed to his vision of "one united people" despite the racially charged atmosphere then, said Mr Wong, who chairs the newly launched $100 million S Rajaratnam Endowment.

Mr Rajaratnam was a journalist who began his career at the Malayan Tribune, before joining The Straits Times. He left journalism in 1959 to enter politics.

Professor Chan Heng Chee, chairman of the Lee Kuan Yew Centre for Innovative Cities, said in a brief tribute yesterday: "Mr Rajaratnam was a man of ideas, a prophet before his time."

As Singapore's first foreign minister, he played a pivotal role in the country's admission to the United Nations on Sept 21, 1965 - one month after independence.

There, he spoke of the "interdependence of nations", an idea that was ahead of its time, said Ministry of Foreign Affairs policy adviser Bilahari Kausikan yesterday.

He was also one of ASEAN's founding fathers in 1967, and guided its philosophy of regional unity and non-interference.

He was a firm believer of the importance of unity in a multiracial society. He penned the Singapore Pledge in 1966, emphasising "regardless of race, language or religion" against the backdrop of racial riots just two years earlier.

He was senior minister in the Prime Minister's Office when he retired in 1988. He died of heart failure in 2006, three days shy of his 91st birthday.