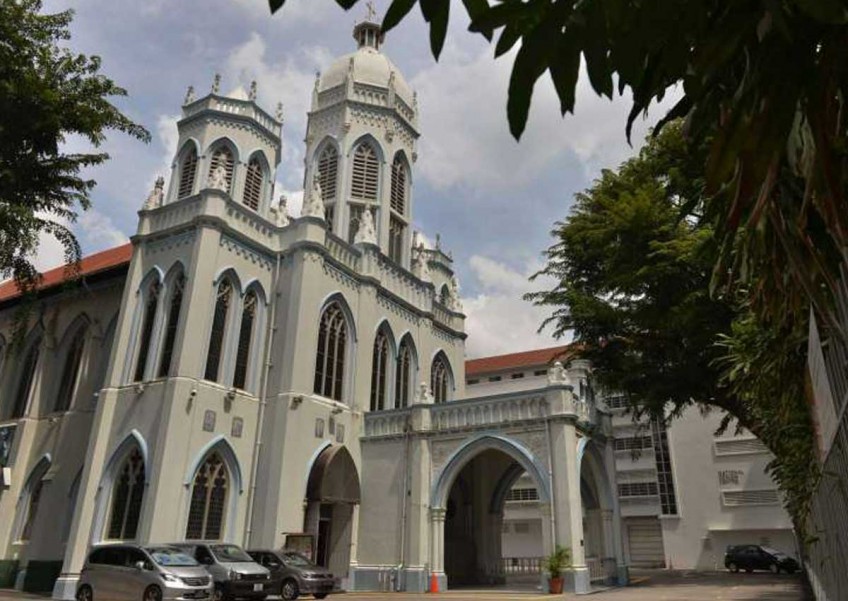 SINGAPORE - A 104-year-old church building along Victoria Street which once served as the headquarters of the Portuguese Mission in Singapore will be gazetted for conservation by the Urban Redevelopment Authority (URA).

The three-storey Parochial House of St Joseph's Church, which is currently the lodgings of the church's rector, was inspired by mediaeval Gothic architecture.

Speaking at the church's celebration on Thursday (June 30) to mark the milestone, Mr Lawrence Wong, Minister for National Development said: "(The Parochial House) is a building that fully deserves its conservation status. It's also a good complement to the main church building which is in itself a national monument.

"The House has stood in Singapore for close to 104 years... It has survived the 2nd world war and three generations, still going strong, marking its importance as a landmark in Singapore's history."

He also noted the building style of the Parochial House, which is an example of traditional Portuguese baroque style, with distinctive features such as pointed Gothic arches at the facade, and pinnacles decorated with crockets, a hook-shaped decoration, adorning the roof.

It also contains nine sets of Portuguese-style painted ceramic tiles that can be found in palaces, churches and important public buildings in Portugal.

A storyboard that traces the history and significance of the Parochial House was also unveiled at the event.

Father Alex Chua, the Rector of St Joseph's Church, said: "It is an honour for the Church to have its Parochial House recognised and conserved for its architectural, historical and social heritage.

"We hope that this gazette will help reinforce the sense of heritage for future generations of Singapore Catholics and non-Catholics alike."

Close to 7,200 buildings here have been conserved since the start of URA's Conservation Programme in 1989.