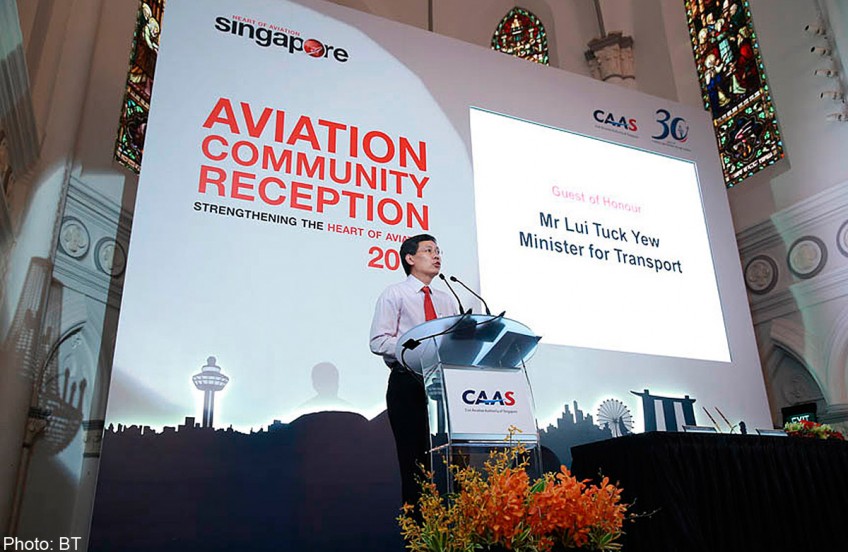 "While we remain bullish about the prospects for Singapore aviation, we recognise that our sector is very susceptible to external shocks," he said at the aviation community's annual reception at Chijmes Hall.

Mr Lui began his speech on a sombre note, expressing his condolences to the families of the nearly 300 victims of Malaysian Airlines flight MH17, which crashed in Ukraine on Thursday.

Passenger traffic growth in the region slowed in the first half of this year, due largely to reduced travel to Thailand because of its volatile political situation, and fewer tourists from China travelling to Malaysia because of the disappearance of flight MH370 in March. Mr Lui said growth for the second half of the year would also be challenging, and it was important for the industry to be able to "ride out challenges and seize new opportunities when recovery comes".

The Civil Aviation Authority of Singapore (CAAS) will roll out a $100 million Airport Productivity Package over the next four years. It will also absorb $50 million of air navigation services charges over the next two financial years.

The productivity package includes $20 million in funds to help more in the industry - like airlines and ground handlers - adopt airport equipment so that they can rely less on manpower and be more efficient.

Equipment and software covered under this programme include self-service check-in and bag-drop services for passengers departing from Changi Airport.

The package will also allocate $17 million to two competition- based programmes to find solutions for the aviation industry. For example, one programme will focus on finding ways to automate the baggage loading and unloading processes for narrow body aircraft that need only minimal human intervention and oversight.

Planes with narrow bodies, like the Boeing 737 and Airbus A320, make up more than half of all flights at Changi Airport. It currently takes eight workers to load or unload baggage from such aircraft.

All this is part of an industry drive to "promote productivity more aggressively", said Mr Lui.

The Airport Productivity Steering Committee led by CAAS has set a goal of raising productivity by 3 to 4 per cent annually to cope with limited manpower, he added.

The air navigation service charges to be absorbed are currently being paid by the Changi Airport Group (CAG), which will pass the savings on to airlines.

Airlines will get a 10 per cent rebate on landing charges at Changi Airport from Sept 1 this year to March 31 in 2016. The CAG last month announced a separate $100 million Growth and Assistance Incentive programme to help the airport community with costs.

Yesterday, Mr Lui also gave an update of the CAAS' $100 million Aviation Development Fund (ADF), which was set up in 2010 to help the aviation industry grow and stay competitive.

So far, a total of $30 million has been committed to programmes like new repair schemes and Coolport@Changi, a storage facility to store products like drugs, fresh-cut flowers and refrigerated foods.

Enhancements to the ADF will be announced by early 2015, he added.