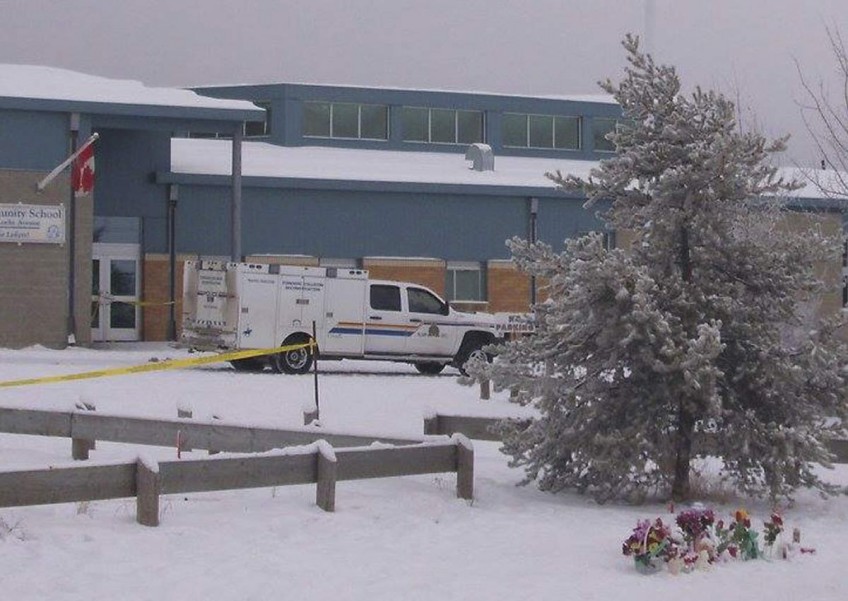 A Royal Canadian Mounted Police vehicle is seen parked outside the Dene high school campus of the La Loche Community School in La Loche, Saskatchewan January 24, 2016 in this handout photo provided by Raymond Dauvin. A 17-year-old boy was due to appear in court on Monday, charged with four counts of murder after Friday's deadly incident in La Loche, an impoverished town in the western province of Saskatchewan.
Reuters

Ottawa - A high-school student was formally accused Monday over the murder of two teenage brothers and two teachers in a remote Indian community in Canada plagued by poverty and boredom and a growing loss of cultural identity.

During a brief court appearance the 17 year old, who cannot be identified under Canadian law, was indicted on four counts of first degree, or premeditated, murder and seven counts of attempted murder, as well as a weapons charge.

He is scheduled to return to court on February 22.

Friday's gun attack traumatized the 3,000 inhabitants of the small lakeside village of La Loche, in the western prairie province of Saskatchewan.

Shock also spread across the nation, which is not used to this sort of violence. Unlike in the United States, mass shootings are rare in Canada, where firearms are more regulated than south of the border.

The suspect killed two brothers -- Drayden and Dayne Fontaine, aged 13 and 17 -- at their home before going to a nearby school.

He was taken into custody after police received an emergency call about "a person discharging a weapon in the community," RCMP superintendent Maureen Levy said.

On Sunday, hundreds attended a church service in memory of the victims, while leaders expressed their grief.

"I want that school to be rebuilt. Torn down, rebuilt... because of the trauma," Janvier said after meeting officials, including Saskatchewan Premier Brad Wall and Canada's Public Safety Minister Ralph Goodale.

"We are hurting and we will be for months to come," he said. This "drama is now known around the world."

La Loche is no stranger to violence, having long struggled with high rates of addiction, suicide and poverty.

In a region that boasts one of the lowest unemployment rates (5.5 per cent versus 7.1 per cent Canada-wide) in the country, in La Loche almost one in two adults is unemployed.

There is little to do for most young people, who after graduating must consider leaving the community to find work.

"The government has to look at a whole series of measures to improve community safety," said LeBlanc.

Social conditions in the aboriginal community on the edge of the Arctic Circle, deep in the boreal forest and 800 kilometers (500 miles) from the provincial capital Regina, are worrying.

The life expectancy of Chipewyan (or Dene) people of the region is lower than the Canadian average, the crime rate is double the national average, especially for homicides and sexual assaults, according to official statistics.

In La Loche, the suicide rate -- which provides a glimpse of wider social ills -- is three times higher than in the rest of the province.

Disparities between First Nations aboriginal people and the rest of Canada are rooted in decades of discrimination and bad policies.

Last July the UN Human Rights Committee in a report blamed Ottawa for many of the inequalities affecting indigenous people and urged the government to do more to support natives.

Canadian Prime Minister Justin Trudeau has promised to ratify a UN Declaration on the Rights of Indigenous Peoples. Canada and three other countries -- Australia, the United States and New Zealand -- were the only nations to vote against the UN indigenous text in 2007.

As part of an ongoing rapprochement between the federal government and Canada's more than 600 indigenous tribes, Trudeau also announced last month an inquiry into why 1,200 indigenous women were murdered or have gone missing over the past three decades, something long demanded by aboriginal leaders and activists.