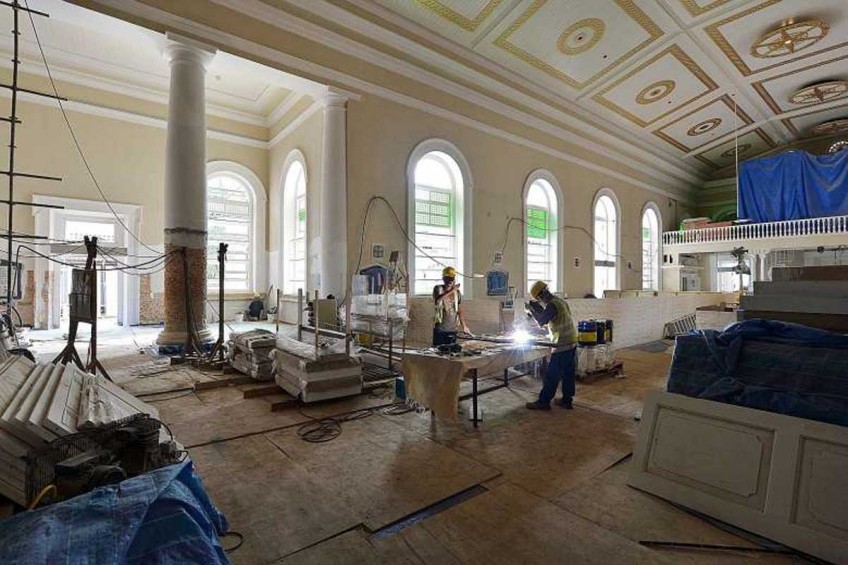 A 173-year-old time capsule and granite foundation stone of the country's oldest Catholic church have been unearthed, in what experts describe as a "rare discovery".

Contractors found the hitherto missing capsule and foundation stone earlier this year while restoring the Cathedral of the Good Shepherd along Queen Street.

The time capsule - possibly the oldest one found here - comprises publications such as a prayer booklet and newspapers from 1843, as well as 24 international 18th- and 19th-century coins and tokens. A foundation stone, or cornerstone, is the first stone set in the construction of a masonry foundation.

Mr Ho Weng Hin of Studio Lapis, the cathedral's conservation specialist consultant, said both artefacts mark the times in which they were constructed and embody the values the community held dear.

They were buried by one of Singapore's early founding communities - French Catholic missionary priests of the church, among others.

Highlighting the significance of the find, archaeologist Lim Chen Sian said: "A church being erected in the mid-19th century was a major event for the nascent European community... Remember, it was just about 24 years since Singapore's founding."

It was also one of the largest and most monumental buildings of its time, experts said.

The church was conferred the status of a cathedral - the seat of a bishop - later in 1888. It was gazetted as a national monument in 1973.

The time capsule pit, about the size of a shoe box, was found under a column base on a series of granite steps along the cathedral's Victoria Street facade on Jan 29. It had been sealed shut by the foundation stone.

The currencies from places such as Vietnam, Britain, France, Spain, and the British East India Company drive home the point that Singapore was an important place for trade, said Mr Ho.

Mr Lim believes the multinational collection of coins was perhaps an attempt to "heal and marry the schism" which existed between the early Catholic orders of varied nationalities such as the French, Portuguese and Spanish, that were present in early Singapore.

The present-day find corroborates a June 22, 1843 news report in the Singapore Free Press, which said the church's foundation stone was laid above the pit in an early morning procession on June 18 that year.

While the Singapore Free Press report specified that the stone was laid on the front corner of the church, historians had assumed that its original frontage faced Queen Street.

Contractors had been asked to look out for the missing capsule around the site during restoration, said the cathedral's technical committee secretary Jevon Liew.

Contractors chanced upon the artefacts after a pediment below the cathedral's bell tower collapsed on Sept 3 last year. Seven of the eight brick columns that held up this pediment along Victoria Street also collapsed.

While the pediment and columns will be reconstructed, Mr Ho proposed saving two of them for future display in some form on the cathedral's grounds. As workers were removing one of the two columns, they found the various artefacts scattered alongside two broken apothecary bottles in the rubble-filled pit.

The approximately A3-sized cornerstone formed part of one of the column bases. The time capsule was also reported to have comprised publications such as a prayer and ceremonies booklet from the first service at the new site, and 1843 editions of the Singapore Free Press, the Straits Messenger, the Bengal Catholic Herald and the Madras Catholic Expositor.

The publications were found in varying states of decay. According to old reports, they had been placed in vases beneath the cornerstone - likely the apothecary bottles discovered by workers.

Mr Ho believes that the newspapers could have been included to impress on future generations that the community had been civilised and cultured. He said the inclusion of the religious publications was to show the link between Singapore's Catholic community and the international one.

Monsignor Heng added that the construction of the church had been a milestone for the Catholic community.

He said the plan now is to restore the artefacts and display them in the cathedral's new heritage gallery when the institution reopens. Its official reopening has been set tentatively for next February. The $38 million restoration project, which started in November 2013, was delayed by about five months by the collapse of the columns.

Archaeologist Mr Lim, who had conducted an archaeological dig outside the priests' residence in 2013, will be studying the finds and incorporating his analysis as part of the cathedral's heritage gallery.

Monsignor Heng said there are also plans for a new commemorative stone to be inserted into the restored structure.

He said: "Like our predecessors, we too are anticipating future generations to enjoy the cathedral."

Heavenly finds in the most unlikely places

In the dim light of the Cathedral of the Good Shepherd's sacristy - the room where items used for church services are kept - Mr Jevon Liew was examining a brass crucifix and a matching pair of candlesticks.

That morning in 2013, he noticed that they bore identical French inscriptions around their bases.

Translated, the words proclaimed a significant milestone in the history of the Catholic Church in Singapore: They were gifts from France to the cathedral in 1897, the year of its official consecration.

Mr Liew, 32, who leads a group of men who help the priests during services, has since unearthed many treasures from the nooks and corners of the 169-year-old building in Queen Street.

Some, like an elaborately filigreed chalice belonging to the Right Reverend Edouard Gasnier - the first bishop of the Diocese of Malacca when it was revived in 1888 - were in use until the cathedral was closed for restoration in 2013.

Others, like the amethyst pontifical ring of Archbishop Michel Olcomendy, the first archbishop of Singapore, remained unidentified until the discovery of a 1951 Straits Times photograph that showed the late archbishop wearing the large, purple stone on his gloved hand.

"Items were found in the most unlikely of corners, waiting to be discovered," said Mr Liew, who has for several years combed the recesses of the cathedral for items worth keeping. Some were on a high shelf while a few were hidden under robes used by the priests. The service book used by Pope Saint John Paul II in 1986 was found inside a filing cabinet in a dusty storeroom.

Monsignor Philip Heng, 61, the current rector of the cathedral, feels each item has a unique story.

He said: "Historical artefacts such as these immortalise a particular period of the Church's rich heritage through the unique artistic expressions of master craftsmen."

He added that there are plans to exhibit some of the items in a new heritage gallery on the cathedral grounds.

The items will be professionally maintained so that they are preserved for posterity.

For Mr Liew, an urban planner, these treasures are a physical link to past generations of Catholics.

He said: "Imagine the thousands of people over the last 169 years who may have said a silent prayer in front of those vintage statues .

"Imagine Pope Saint John Paul II who, in 1986, flipped through the pages of his white service book which is now in our collection. We have a duty to protect and preserve these for future generations."