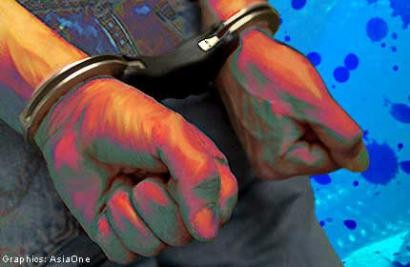 SINGAPORE - Lured by a picture of a woman he found online late one night, Mr Rajiv Pratap Singh went to Hougang in the hope of meeting her for a bit of fun.

The 26-year-old called a number on the website and she told him to meet her at the void deck of her flat. But when he got there, Kek Soon Guan appeared and threatened to beat him up unless he handed over $180.

On Monday, 20-year-old Kek was sentenced to 18 months' probation. He had pleaded guilty last month to committing extortion and mischief. His two accomplices, Tiong Shi Lin, 23, and Raymond Kor Wei Ming, 22, have been charged but are yet to be dealt with.

Tiong and Kor are said to have participated in the extortion offence on Jan 5.

Kek was arrested by police again for committing mischief on April 23.

Investigations revealed that his mother owed money to a loan shark and paint had been splashed on the door of their Hougang flat.

Out of curiosity, Kek called the cellphone number scrawled on the wall. The loan shark then asked him to carry out acts of harassment and vandalism for him at various addresses, offering him $120 for each one.

But Kek decided to cheat the unlicensed moneylender instead by downloading images of vandalised homes from Google.

Hoping to convince the loan shark that he had targeted the addresses specified, he scrawled graffiti in crayon on the walls of the staircase in his block, then sent him photos of it.