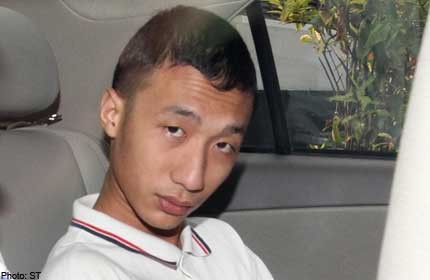 Soh pleaded guilty and his original murder charge was reduced to culpable homicide.

SINGAPORE - The 23-year-old man who stabbed four women, killing one, as part of a morbid sexual fantasy he harboured since he was in primary school, was put behind bars for life on Thursday.

Soh Wee Kian had to be jailed for a lengthy period "for the sake of the public and for your own good", Justice Choo Han Teck told the full-time national serviceman, who stood expressionless.

Prosecutors had argued that the violent nature and number of his offences showed that Soh was mentally unstable, and likely to commit the same crimes. But because of his mental condition, he was also spared caning.

Mr Ng Kak Joo, the widower of the 32-year-old mother of two who was killed, said that the case had been one disappointment after another - first Soh was spared the noose, and now, the cane.

"The one who did not deserve to die, died; and the one who did, lived," said the 42-year-old in Mandarin, adding that he had a son in Primary 6 and a daughter in Primary 2.

Soh had been originally charged with the 2010 murder of Madam Hoe Hong Lin in Woodlands. But it was reduced to culpable homicide on the basis that he will plead guilty and that the prosecution will seek a life term.

On Tuesday, he also admitted to causing grievous hurt with a weapon for stabbing Madam How Poh Ling, 28, in Sembawang. Two charges for slashing two other women were taken into account.

He carried out his reign of terror over a span of nine months in 2010, culminating with Madam Hoe's death. His DNA was found on the knife sheath he dropped at the scene.

But Soh told psychiatrists he had been thinking about stabbing women in the back and touching their breasts ever since he was in Primary 5.

That was when he started tailing schoolgirls and women, especially if they were pretty and were wearing skirts. Over the years, he did it on and off.

In early 2010, his "habit" escalated when he actually carried out his fantasies, slashing two women in separate incidents in Yishun. In May, he stabbed Madam How, and four months later, attacked Madam Hoe.

Soh was arrested on Oct 14 at the Singapore Armed Forces detention barracks, where he was being held for absence without official leave (Awol).

While conflicting psychiatric reports were submitted to the court about his mental condition, both sides agreed that Soh suffered from some form of impairment. So his lawyers asked for the cane to be spared, as is usually the case for offenders who have a mental impairment.

Prosecution psychiatrist Jerome Goh from the Institute of Mental Health said Soh had an adjustment disorder in response to the stress he experienced in national service.

Defence psychiatrist Tommy Tan diagnosed Soh, whom he said had a family history of schizophrenia, as suffering from schizotypal disorder, which involves a preference for social isolation and paranoid beliefs.

Interviews with Soh's family and friends painted a picture of a a loner who had "negative" thoughts, and yet harboured unrealistic ideas such as wanting a model girlfriend. A church friend described him as "attention seeking", saying that Soh frequently sent out "emotional" text messages to the point that people simply stopped replying.

Soh's supervisor in the navy said his work performance was not satisfactory and he had gone Awol a few times.

After he was sentenced, Soh was allowed to speak to his mother, stepfather and brother.

His stepfather Ng Chee Yong later told reporters that they wanted to say sorry to the victims and their families.