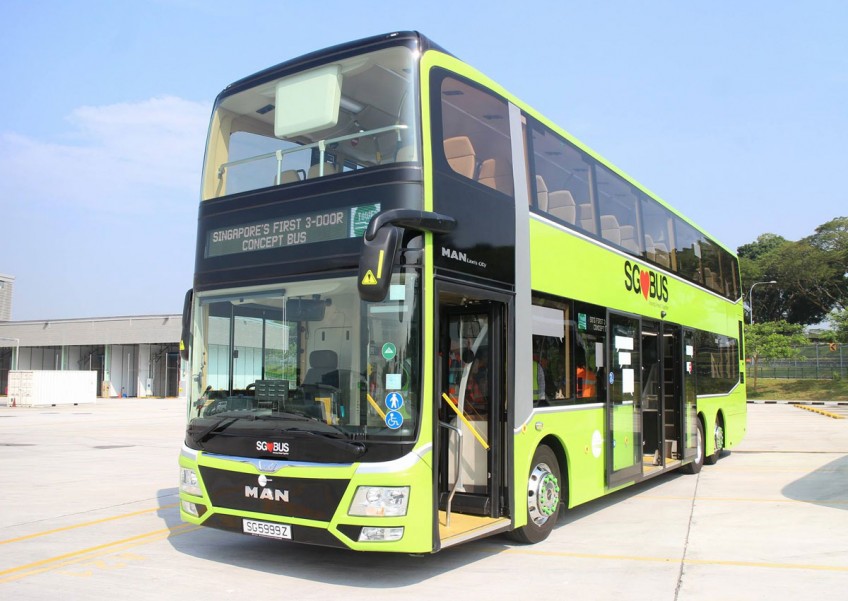 The prototype bus will have a third door, and two staircases to facilitate the flow of commuters.
facebook/SMRT

A double-decker bus with three doors hit the road yesterday as part of a study by the Land Transport Authority (LTA) to evaluate its suitability for Singapore's use.

Unlike other double-deckers here, the prototype has an additional staircase reserved for commuters leaving the upper deck to exit from the third door.

While the layout can help improve the flow of commuters, the three-door bus is around 15 per cent more expensive than a two- door one because of the complexity of the design, the LTA said, based on preliminary estimates.

The custom-made bus will ply the route of Tower Transit Singapore's service 143 during a six-month pilot. It is designed by Singapore Technologies (ST) Kinetics using a chassis from Germany's MAN Truck and Bus.

A three-door single-decker bus will also be tested with operator SMRT from the second quarter of this year. The LTA said it will study how the three-door models might "reduce boarding and alighting time".

The three-door double-decker is also 0.8m longer than the usual 12m, and the LTA will evaluate if it is suitable for the current infrastructure, such as bus stops and interchanges.

While three-door buses are commonly used in Europe, passengers get in and out on the right, so the engine, located in the rear left, does not get in the way.

Mr Vincent Kee, head of MAN Projects at ST Kinetics, said that for Singapore, a custom design was required to make space for the extra door on the left.

The LTA said it would have a better idea of the eventual cost if a bulk purchase tender was called later.

In general, commuters gave the new bus the thumbs-up. Nurse Desiree Monzon, 25, said: "Getting on and off will be more convenient. The normal double-deck buses have only one staircase, so it is sometimes difficult for passengers to get down, with others trying to climb up."

But retiree Tham Khai Leng, 69, said it would take time for people to get used to the new design. "After climbing to the upper deck, most commuters will find a seat nearest to the staircase. They will then have to walk to the back to get down," he added. "For elderly commuters, this may not be so easy."