The 3 Lee Kuan Yews that I know 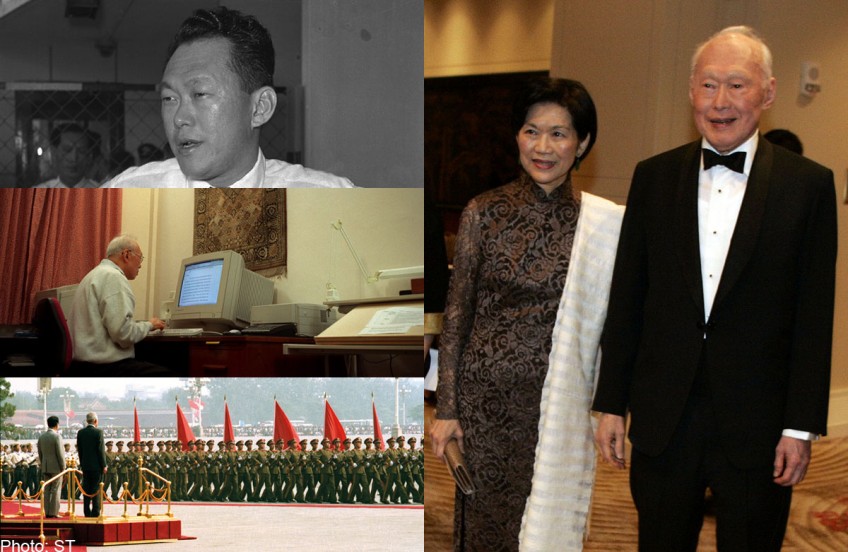 OCT 27, 2009: MM Lee with Prof Chan at the US-Asean Business Council’s 25th anniversary gala dinner at Mandarin Oriental hotel, where he was presented with a lifetime achievement award by the council.(Right)

Chan Heng Chee, ambassador-at-large and chairman of the Lee Kuan Yew Centre for Innovative Cities at the Singapore University of Technology and Design, was ambassador to the United States from 1996 to 2012 and is a former political science lecturer.

OVER the years, I came to know three Lee Kuan Yews: the tough prime minister, the perfectionist writer, and the elder statesman.

The first time I met Mr Lee was in May 1969. I was a young assistant lecturer newly returned from Cornell. The Prime Minister had come to speak to the staff of the University of Singapore.

A week earlier he had been deeply disturbed by the reactions of students who did not seem to understand the gravity and implications of the May 13 racial riots in Malaysia, judging by their questions and mood at his public lecture.

The PM was seized by the potential contagious impact on Singapore, then a fledgling nation. How could he make them understand the stakes and our vulnerabilities?

I stood up to say something in defence of the students. Mr Lee dismissed what I said. I came back with another response. Someone who was present mumbled: "She is very young."

Mr Lee was seen as a stern, no-nonsense, authoritarian figure. He was respected and feared. He brooked no opposition. He felt the weight of the immense tasks ahead of him. He probably disagreed with and did not like most, if not all, of my writings as a political scientist for the next two decades.

I saw him again after I returned from my posting as the Permanent Representative to the UN. I was invited to the Istana with Tommy Koh and Kishore Mahbubani to lunch with him.

It was 1993. We ate simply in a small room. There I met a different Lee Kuan Yew. He was putting forth his views on the world. The Cold War was over, the Soviet Union had collapsed, the US and Europe were triumphalist. He was thinking through his assessment of the new power configuration and what this meant for Singapore.

In hindsight, he was positioning Singapore in the new world order to ensure maximum prospects for its survival. We were his sounding board. He wanted us to challenge his conclusions.

I realised then that he was open to argument, but you had to have strong arguments. He was rigorous and robust in arguing back, like an advocate in court. After several lunches, I learnt gradually that his brusque and strong response was his debating style. If the argument was good, he would accept it.

This was demonstrated again in 1995 when he started writing his memoirs. He sent each draft chapter around to a few people to critique. I was one of them.

He would ask what we thought of what he had written, and how he could improve it. Was it tedious? Factual errors, statistics, misremembered dates, he took in at once. He accepted comments telling him it was tedious and he would lose the reader's interest.

There were occasions when one or a couple of us would disagree with his reading of an event or conclusion in his analysis of domestic or international developments. Again if the arguments were good he deleted or amended the paragraphs.

But it did not end there. He would revise his chapter and send it back to us to ask again: Is this better? Could he improve it further? Only when we had no further comments did he leave the draft.

I was posted to Washington by mid-1996. I received his faxed chapters in the morning. My comments were sent to him by noon. My astonished secretary would come to my office at 2.30pm to say he had sent back the revised version. It was 2.30am in Singapore.

This rhythm of exchange was repeated again and again. He was a perfectionist.

As ambassador in Washington, I accompanied him and Mrs Lee when he visited the US as Senior Minister and later Minister Mentor.

Whatever his title, Americans at the highest levels - presidents, secretaries of state, defence or treasury, elected representatives - made time for him. They wanted to hear his assessments of Asia and the world.

Ex-presidents and prime ministers of other countries do not normally get a White House meeting with American presidents. Mr Lee was the rare exception. The captains of industry and business, the chairmen and CEOs too were eager to get a share of his time and insights.

Mr Lee knew how to put a point across that landed the punch and left a strong impression with his American hosts. He never told anyone what they wanted to hear. He told them what he thought. In these meetings he infused American officials and industry with confidence and trust in Singapore and Singaporeans. He created our brand name, and investments flowed into our country.

Mr Lee was strong and energetic when he came to the US in the mid-1990s. His visit was the best thing for an ambassador, for his name opened doors. I noticed then that sometimes when asked a question, he would admit frankly that he did not know the answer. He was a mellower and more philosophical Lee Kuan Yew.

I came to know how close and devoted he was to Mrs Lee. He was touchingly solicitous of her and more so as she became frail after her first stroke. But her presence calmed him. Later, after her death, he himself turned frail.

In 2010 when he went to Washington to receive the Lincoln Medal, his last trip to the US as it turned out, he was widely acclaimed as "one of the great statesmen of Asia".

Everyone spoke of how he built a remarkable success of Singapore out of so little. The admiration and respect for him and for Singapore were genuine and universal. They saw him as the last of the era of great post-war leaders.

It is hard to sum up Lee Kuan Yew. He was truly a patriot. He worked indefatigably for Singapore. He had the interest of his country at heart.

My wish is that younger Singaporeans should read about him, know him and understand his role in the making of our nation.