SINGAPORE - Passengers on a Scoot flight from Taipei to Singapore will return home two days later than expected.

However, due to an electrical component defect, the flight had to be grounded while replacement parts were flown in from Singapore, said a Scoot spokesman.

The flight was rescheduled for Monday at 11am, but the technical issue persisted, leading to another reschedule for later in the night.

A Scoot spokesman said on Monday evening: "To mitigate further disruption to our customers' travel plans, Scoot has arranged for two rescue flights to bring the 356 affected customers back to Singapore. The two rescue flights are scheduled to arrive in Singapore by early morning on Jan 1, 2019."

Ms W. L. Xie, along with her husband and eight-year-old son, were some of those affected by the delay. 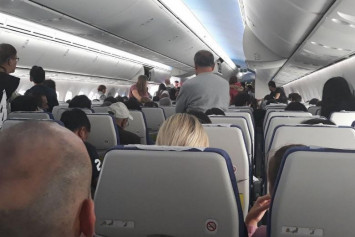 The 41-year-old healthcare professional told The Straits Times that her family arrived at Taipei Taoyuan Airport around 12pm on Sunday to check in for their flight after a five-day holiday in Taiwan.

After they boarded, she said an announcement was made that the plane had some problems with its engine and would need time to fix.

Passengers spent around three hours on the plane before they disembarked.

There were also Japanese passengers on the plane as they were transiting from another Scoot flight from Tokyo.

Those who bought duty free items were told to return them and get a refund. Passengers were also given meal vouchers worth about NT$250 (S$11) each, said Ms Xie.

Later that night, passengers were told to collect their luggage and find their own accommodation for the night as nearby hotels were fully booked.

Fortunately for Ms Xie's family, they had a friend in Taiwan who helped them find a motel about a half an hour's ride away from the airport.

Some passengers slept over at the airport, said Ms Xie.

They were told to check in around 8am on Monday for the re-timed flight that was departing at 11am.

"We boarded around 12pm, but after a while, they announced again that there was an engine problem that would need to be fixed," Ms Xie said.

The passengers arrived back in the boarding area around 2.45pm after disembarking again, and were given two meal vouchers each, she added.

Scoot said that affected customers were provided with refreshments and meals during the delay.

The spokesman added that customers who had sought their own accommodation would be offered reimbursement when they returned. In addition, a Guest Promise Voucher of $100 would be offered to affected passengers.

Ms Xie said that apart from the announcements of the engine problem and disembarkation, there were not many updates from the airline. "They should have communicated more," she said.

"I feel frustrated waiting with no definite arrangement," said Ms Xie. She added that her son had been feeling unwell when they checked in on Sunday, and the family had hoped to reach back to Singapore soon to rest.

She also planned to return to work on Monday, but had to request an extra day of leave due to the delay.

The Scoot spokesman said: "Safety is of utmost priority to Scoot, and we sincerely apologise for the inconvenience caused to our customers' travel plans."