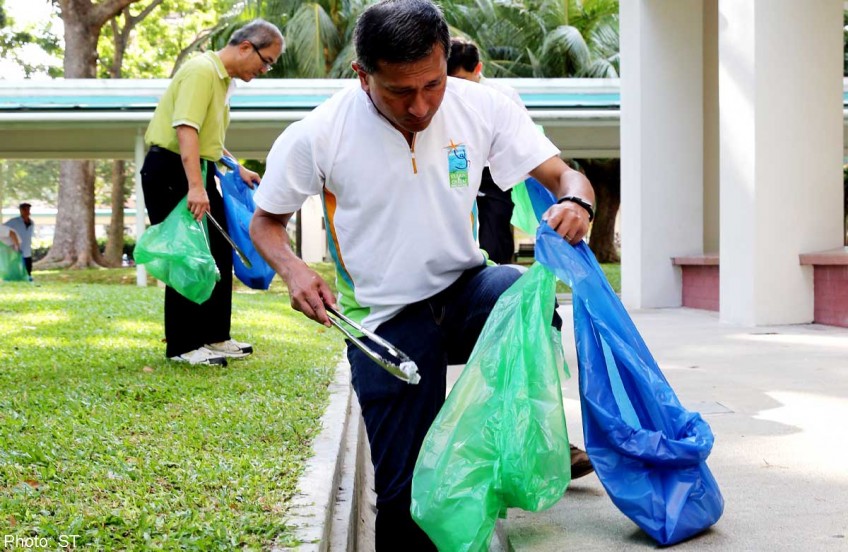 Joining the volunteers yesterday was Dr Balakrishnan, who said people need to change their attitude that “someone will pick up after me”.

Just two years ago, it would be easy to spot cigarette butts, used tissue paper and empty food packets in parks and at the foot of HDB blocks in Bedok.

But Bedok is much cleaner now, thanks to residents and grassroots leaders who roam the neighbourhood regularly to pick up trash. Yesterday, Environment and Water Resources Minister Vivian Balakrishnan joined one of these litter-picking efforts in Bedok at an event called "Operation WE Clean Up!".

More than 360 volunteers from schools and other groups took part in the exercise held by the Public Hygiene Council, the Singapore Kindness Movement and the Keep Singapore Beautiful Movement.

They collected about 120kg of garbage after combing through the neighbourhood for an hour.

Speaking to reporters on the event's sidelines, Dr Balakrishnan said Singapore may have gained a worldwide reputation for being a clean city, but it can do much more to improve.

One thing that needs to change, he said, is the "someone will pick up after me" attitude.

Dr Balakrishnan said he saw a man throwing a cigarette butt even as volunteers were picking up rubbish around him yesterday morning.

"He did not seem to care. This attitude has to change," he added. Public Hygiene Council chairman Liak Teng Lit agrees.

He recently saw Singaporeans throwing out litter from their cars at a multi-storey carpark in a new estate.

"I saw young, educated couples who did not care that they were littering the ground by throwing out large pieces of rubbish," he said. Yesterday, the council also introduced a litter picking toolkit, which includes trash bags and wet wipes.

It will be distributed during other litter-picking events held this year.

The council is not alone in its efforts to keep Singapore clean.

Anti-littering volunteer group Waterways Watch Society organised a competition to get Singaporeans to submit photographs of the dirtiest places here earlier this year.