A funpack that was given out at National Day Parade 2019.

It's a special birthday for Singapore this year as the nation focuses on celebrating the 55th year of its independence in August during an ongoing viral outbreak.

About 1.2 million funpacks — normally given to parade audience and participants — will be given to every Singaporean and permanent resident household, the National Day Parade organising committee said on Wednesday (May 20).

Shortly after the announcement was made, comments started pouring in on the Facebook posts of NDPeeps and Defence Minister Dr Ng Eng Hen.

While they appreciated the gesture, numerous Singaporeans questioned if the resources used to prepare the NDP funpacks could be put to better use as the country weathers the Covid-19 pandemic.

Perhaps demonstrating this year's theme of Together, A Stronger Singapore, they're suggesting that funds and manpower be rechanneled into helping the elderly, those with disabilities and people who've lost jobs due to the global recession. 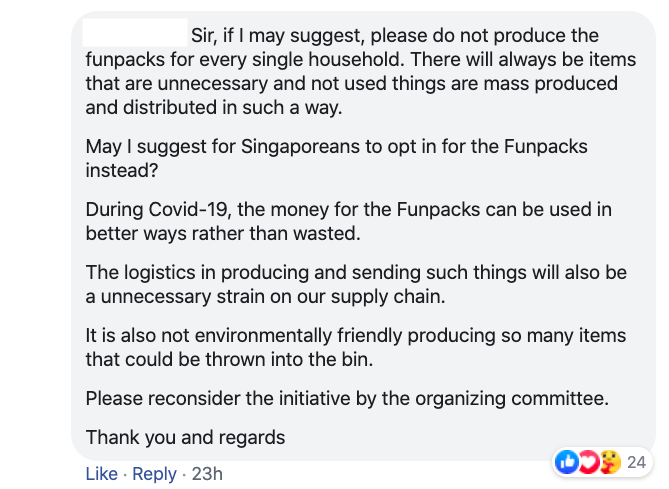 One of them, Kaushik Ilango, started a petition suggesting that people be given the choice to opt out of receiving the NDP funpacks on May 21.

"At a time like this, I understand that handing out funpacks, 'something Singaporeans have a close affinity with', could certainly bring joy to many of us," he wrote.

"I for one would prefer to give my funpack away to someone who needs it more than I do."

Also addressing a potential waste problem, he said: "I also do not want to see many funpacks disposed off irresponsibly by those who do not need it. This will only require more manpower to clean it up. [sic]"

Last year, local green group Zero Waste SG suggested doing away with funpacks because they generate a sizeable amount of disposable waste after the celebrations are over.

And it appears that many are in favour of the man's suggestion as the petition has garnered over 38,000 signatures at the time of writing.

While the cost of this year's parade has yet to be revealed, the concept of NDP has changed considerably from the initial budget which was planned for a floating platform celebration, said NDP executive committee chairman Brigadier-General Frederick Choo.

"But... rest assured that we will do all we can to make sure all expenditures are prudent and responsible."