Nine in 10 of the products seized by the Health Sciences Authority (HSA) recently were found to contain sibutramine, a banned substance.

According to MedicineNet.com, sibutramine is a neurotransmitters altering substance that assists with weight-loss.

Some of the weight-loss products also contained other potent ingredients such as diuretics (to help the body get rid of excess fluid) and antihistamines (for relief of allergies). These adulterated products include 'DZ Garcinia Herbal Plus', 'Gorgeousleem Advanced Capsule', 'Figure-Up Slimming Pill' and 'XXS Advance'.

The products are among over 39,000 items of illegal products confiscated in the weeklong 'Operation Pangea' held from Sept 12 to 19, said an HSA statement issued on Monday (Sept 25).

Worth a total street value of over $133,000, the items include sexual enhancement drugs (SEDs) and cosmetics.

The blitz, which was the 10th instalment of Operation Pangea, was coordinated by Interpol.

During the week, HSA intensified surveillance on local websites to detect and stop the sale of their illegal products. Three persons are currently assisting HSA in the investigations.

Said the HSA statement: "Weight loss drugs that are approved by HSA are available only from a doctor or pharmacist as these are potent medications and should only be taken under medical supervision. There is no quick and easy way to lose weight - it's about achieving and maintaining a lifestyle that incorporates the principles of healthy eating and active living."

One of the brands of cosmetic products seized was 'Tati Skincare', which was, in fact, banned a few months ago. HSA had alerted the public in June about its high mercury level and other prohibited ingredients,

But it resurfaced online in September, as a "new and improved Tati Skincare", said HSA.

"Repackaging the same product is a tactic undertaken by illegal manufacturers in an attempt to evade authorities' detection and entice consumers," it said in the statement.

For example, the analysis of its repackaged 'Therapy Cream 1' found it contained high levels of mercury while 'Therapy Cream 2' contained hydroquinone, a substance used in whitening products, and tretinoin, which is used to curb acne.

After a decade of articipation in Operation Pangea, HSA concluded that lifestyle products such as weight loss products, cosmetics and contact lenses, have continued to be its primary concern. 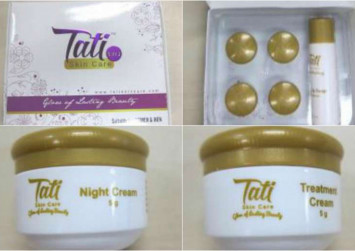 Associate Professor Chan Cheng Leng, Group Director of HSA's Health Products Regulation Group, said: "While HSA continues in its effort to disrupt the online sale of illegal health products, consumers also play an important role in safeguarding their own health by being aware of the risks associated with internet purchase of health products. Be wary of products that claim quick and effective cures as they may be adulterated with potent ingredients, and pose serious danger to consumers."

If you encounter illegal, counterfeit or other suspicious health products being sold online, please notify the Enforcement Branch of HSA at Tel: 68663485 or email: hsa_is@hsa.gov.sg.