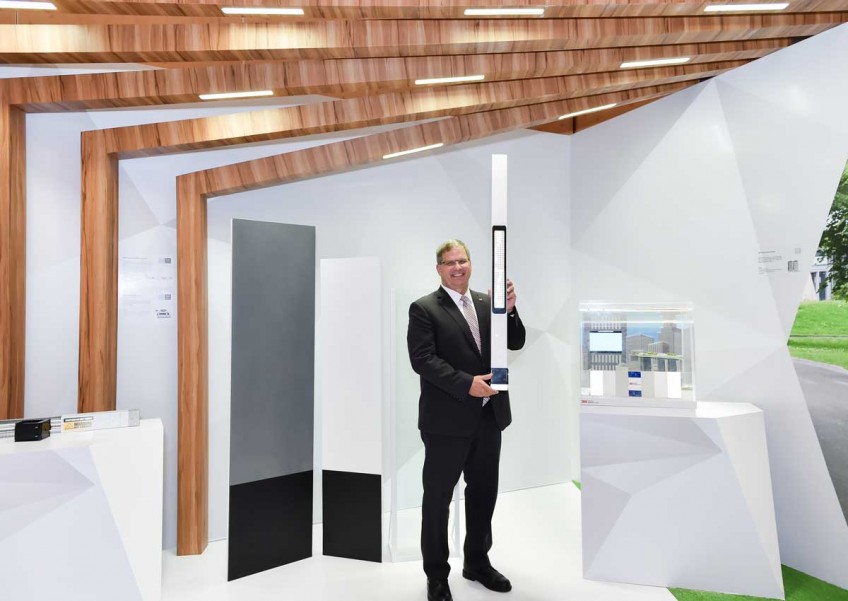 Dr Olson demonstrating 3M's aluminium tube laminated with reflective film. The light from the panel, where his left hand is, comes from the light on the ceiling that is bouncing off the reflective film within the tube.
3M Singapore

The most recent 3M Channel Lighting System, which made its debut this week at the World Cities Summit held at the Sands Expo & Convention Centre at Marina Bay Sands, is a light management solution that allows a single LED light source to be evenly distributed across a 10m long aluminium duct.

The inside of the square shaped duct is laminated with a reflective 3M film that is able to reflect light across a longer distance.

Openings placed along the aluminium duct allows light to leave the structure, to illuminate an area.

If two LED lights placed at both ends of a duct are used, the Channel Lighting System can light up a 20m stretch of space. It is now on trial at select Housing Board corridors and carparks in Yuhua, Jurong.

The second project, 3M Flexible LED, is an alternative to lights bulbs used in towering and waist-high lamp posts used in parks to illuminate pathways. The lights can be modified to focus in a direction, such as towards the ground where light sources are needed, as opposed to having them shine unnecessarily towards the sky.

Smart sensors in the lights can also adjust the luminance according to the different times in the evening.

The final one is the 3M Panel Lighting for Horticulture, which are light sources for vertical farms. These lights can be adjusted to various frequencies using filters, to promote photosynthesis and plant growth.

The individual lights can also be remotely adjusted by offsite users, and also for use with different plant types placed within the same vertical housing.

While the development of the different lighting systems make use of existing 3M technology, such as reflective films and light management in the 3M Channel Lighting System, the local living lab, which attempts to find real world uses for technology, was tasked to incorporate the different items for a single use.

"(For the 3M Channel Lighting System) 3M is diverse in lighting and film technology. So that capability is within the company, and then we look for applications. These applications were actually found here in Singapore, and now we have trials going on here, with HDB," explained Chris Olson, vice-president of research and development at 3M.

The purpose of the lighting system is also to cut down on maintenance, and extensive power drain in urban cities. Having one light source covering a 10m stretch, compared to using traditional lights spread out across the same area, cuts power consumption by up to 50 per cent, noted Dr Olson.

The system is also adaptable. In the case of higher or lower ceilings, the intensity of the LED light can be controlled, and go up to 75W. The plan is to bring these solutions to more countries after the trials are complete.

The lighting systems are only part of a larger partnership that 3M Singapore has with HDB. At the start of the World Cities Summit, both parties announced that they were looking at ways to reduce noise transmission within flats as well.

Opened last October, the Smart Urban Solutions Lab is a S$10 million investment lab that has 10 researchers. The lab forms 10 per cent of 3M's research and development strength here, and the company is looking to double that figure in the near future.

This article was first published on July 14, 2016.
Get The Business Times for more stories.